On a Deluded America

Diana West has written a fiery op-ed that, on its face, seems to provide a well-needed antidote to the moral platitudes that are preventing America from ridding the world of savage brutes ("Deluded America," Washington Times, June 23, 2006). Certainly the defenders of America will be energized to read:

If we still valued our own men more than the enemy and the "civilians" they hide among—and now I'm talking about the war in Iraq—our tactics would be totally different, and, not incidentally, infinitely more successful. We would drop bombs on city blocks, for example, and not waste men in dangerous house-to-house searches. We would destroy enemy sanctuaries in Syria and Iran and not disarm "insurgents" at perilous checkpoints in hostile Iraqi strongholds.

Ms. West sees the central judgment that is needed to win a defensive war: that our people—our soldiers in particular—are worth more than savages and the "civilians" hiding them. The enemy of rational judgment, and a paralyzing moral premise, is egalitarianism—the idea that all people, cultures, and ideas are equal in value. Ms. West rails against this, but then—unfortunately, sadly, tragically—accepts this same premise herself. In World War II, she writes, we were forced to use horrific violence to defeat the Nazis:

For example, bombing cities, even rail transportation hubs, lay beyond civilized conventions, but these were tactics the Allies used to defeat Hitler. However justifiable, civilization crossed a previously unimagined and uncivilized line to save, well, civilization. Then there was Hitler's Holocaust—an act of genocide of previously unthinkable scale and horror. Who in the civilized world before Hitler had ever imagined killing 6 million people? And who in the civilized world retained the same purity of mind afterward? Civilization itself was forever dimmed.

To Churchill's great worry, which she remembers as "that if the civilized society is to prevail over the barbarous one, it will necessarily and tragically be degraded by the experience as a vital cost of victory," she says, emphatically and pessimistically, yes.

Civilization was forever dimmed-by whom? Both by the actions of those who gassed "inferior" races and by those who killed the gassers and set the victims free. What greater statement of moral equivalency between good and evil has ever been made? Civilization is dimmed by Auschwitz and the Third Army, by Hitler as well as Patton. "Civilization itself is forever dimmed—again" she writes of the brutal beheadings of two American soldiers by the jihadists—the "again" referring to Treblinka and Dresden, the Bataan Death March and Hiroshima. Aggressors and defenders—those killing to enslave the world and those killing the killers to set it free—each is degrading, because each breaks "the rules" of civilization.

This does not mean that we should not do what is needed to win, writes Ms. West; win we must. But at what price? "Do such tactics [such as torture of prisoners, or bombing civilians] diminish our inviolate sanctimony? You bet. But so what? The alternative is to follow our precious rules and hope the barbarians will leave us alone, or, perhaps, not deal with us too harshly. Fond hope." Do what is needed, she says, because that is the practical thing to do. To be moral is to follow rules that are supremely impractical.

To the "morally superior"—to those who agree that we are degraded when we resort to violence to end violence, but do not wish to be immoral—Ms. West's message is: get over it. Accept some degradation, because this is necessary in the world we are in. The conclusion is inescapable: we—all of us—are debased creatures, doomed by the very act of defending ourselves to fall to the same level as our attackers. The morally sanctimonious, of course, will answer that they would rather die than be immoral.

Unfortunately, even if written sarcastically—and morality is too important to be discussed in sarcastic terms—it is to the sanctimonious left that Ms. West grants the title "morally superior." This is a sanction they do not deserve. Their moral doctrine of egalitarianism elevates the evil over the good—which is why they rant with greater vehemence against an American soldier who humiliates a jihadist than against a jihadist who uses a pocketknife to behead an American. Why? Because they think that the soldier is worse than the jihadist. Why worse? Because the soldier is an apostate from the civilized (i.e., egalitarian) world, a superior fighter who fell from grace by using violence to end the jihad—which is the very premise that Ms. West accepts.

Man, then, has a choice: to die by failing to fight the jihadist, or to fall to the jihadist's level in order to live. We are failing to prosecute the war vigorously, Ms. West writes, because we want to be moral. But winning will require us to sacrifice our moral goodness, and to take a piece of civilization with us.

What I would like to say to Ms. West is that there is an alternative. It is not true that we must either degrade our own lives by saving them, or lose our lives in order to avoid debasement. We can save our own lives as an act of moral goodness. To do that we must withdraw the unearned sanction that was unjustly hijacked by the sanctimonious protectors of the jihadists. We must say loudly and clearly that their claims to moral superiority are a sham, and that they are immoral.

There is an alternative, a morality that truly values human life, and pours its outrage and its weapons against the enemies of human life; it is called rational egoism. According to this code, acting to win a defensive war by any means necessary is a sublimely moral act—not a compromise with morality that is needed to remain alive, and not an act of debasing civilization in order to save it. It is morally good to destroy those who would start a global jihad to enslave millions to a dark-age theocracy, and to do so with the least possible risk to our own, valuable, people.

Those who would end this war quickly, with overwhelming force, should stand up with proud moral certainty, and proclaim their moral rightness. We do not stoop to the jihadist's level when we kill him—we rid the world of him in the only way open to us, and make clear to his supporters the true meaning of jihad. It is only on these terms that civilization can flourish. 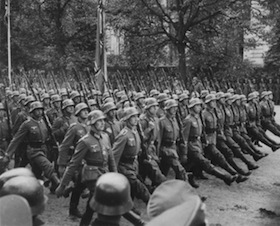 The idea that America descended into barbarism in the act of saving civilization is not true. It was the Japanese and the Germans who for three generations built societies based on military glory, and started world wars to aggrandize the state, the emperor, and the race. They had fallen into a state of moral debasement long before they bombed Warsaw and Nanking—and without any help from us. It was their ideas that degraded them and led to the war—not the other way around. The benefits to millions that followed the bombings of Dresden and Hiroshima—including the utter rejection of war by both societies—are available for all to see. The American victories, and the actions taken to achieve them, were good, morally good.

As I wrote in my article "The Moral Goodness of the Atomic Bombing of Hiroshima":

There can be no higher moral action by a nation than to destroy an aggressive dictatorship, to permanently discredit the enemy's ideology, to stand guard while a replacement is crafted, and then to greet new friends on proper terms. Let those who today march for peace in Germany and Japan admit that their grandparents once marched as passionately for war, and that only total defeat could force them to re-think their place in the world and offer their children something better. (The Undercurrent, April, 2006)

I wonder if Ms. West is being ironic at times. If she is saying that we descended into barbarism since 1946 by adopting a morally paralyzing sanctimonious egalitarianism, then I am with her—for moral egalitarianism is true barbarism. The practical result has been our unwillingness to beat the jihadists. But the cause of our moral paralysis is not our concern for morality, but rather our acceptance of the wrong morality. To save our own lives—and, incidentally, civilization—we need not less morality, but more. We must recognize a morality that values life enough to end the existence of those dedicated to its destruction.