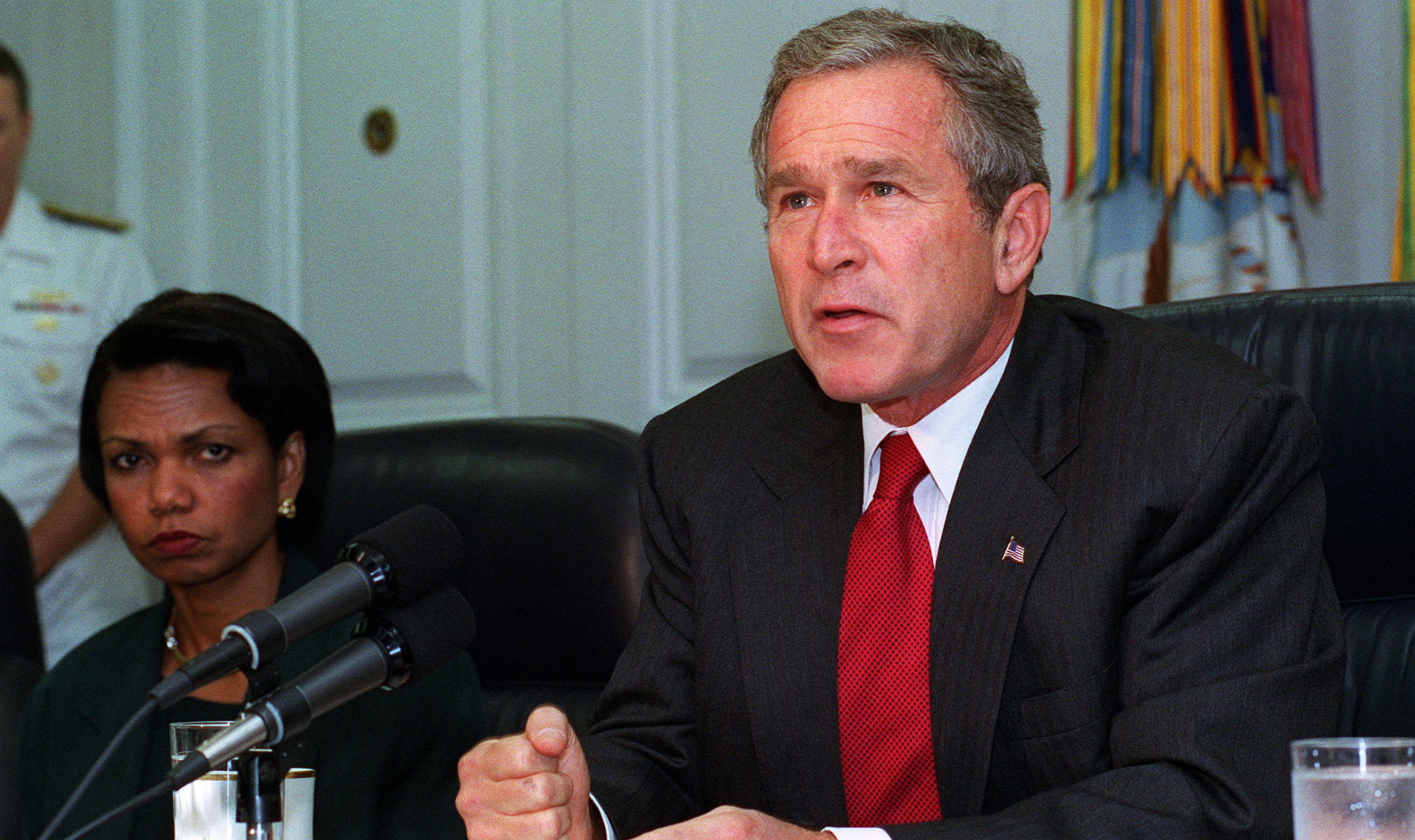 A president focused on American interests, he made clear, would not risk troops’ lives in “nation-building” missions overseas:

In denouncing “nation-building” Bush was in line with a long-standing animus of Americans against using our military to try to fix the endless problems of other nations. But at the same time, he was going against a major contingent of conservatives, the neoconservatives, who had long been arguing for more, not less, nation-building.

By 2003, though, George W. Bush had adopted the neoconservatives’ position. He sent the American military to war in Iraq, not simply to “overthrow the dictator,” but to build the primitive, tribal nation of Iraq into a “democratic,” peaceful, and prosperous one. This “Operation Iraqi Freedom,” he explained, was only the first step of a larger “forward strategy of freedom” whose ultimate goal was “the end of tyranny in our world”3—a prescription for worldwide nation-building. All of this, he stressed, was necessary for America’s “national interest.”

President Bush’s profound shift in foreign policy views reflected the profound impact that September 11 had on him and on the American public at large.

Before 9/11, Americans were basically satisfied with the existing foreign policy. They had little desire to make any significant changes, and certainly not in the direction of more nation-building. The status quo seemed to be working; Americans seemed basically safe. The Soviet Union had fallen, and America was the world’s lone superpower. To be sure, we faced occasional aggression, including Islamic terrorist attacks against Americans overseas—but these were not large enough or close enough for most to lose sleep over, let alone demand fundamental changes in foreign policy over.

Everything changed on that Tuesday morning when nineteen members of a terrorist network centered in Afghanistan slaughtered thousands of Americans in the name of an Islamic totalitarian movement supported by states throughout the Arab-Islamic world. What once seemed like a safe world was now obviously fraught with danger. And what once seemed like an appropriate foreign policy toward terrorism and its state supporters was now obviously incapable of protecting America. Prior to 9/11, terrorism was treated primarily as a problem of isolated gangs roaming the earth, to be combated by police investigations of the particular participants in any given attack; our leaders turned a blind eye to the ideology driving the terrorists and to the indispensable role of state support for international terrorist groups. State sponsors of terrorism were treated as respected members of the “international community,” and, to the extent their aggression was acknowledged, it was dealt with via “diplomacy,” a euphemism for inaction and appeasement. Diplomacy had been the dominant response in 1979, when a new Islamist Iranian regime supported a 444-day hostage-taking of fifty Americans—as part of an Islamic totalitarian movement openly committed to achieving Islamic world domination, including the destruction of Israel and America. Diplomacy had been the response when the terrorist agents of Arab-Islamic regimes killed marines in Lebanon in 1983—and bombed a TWA flight in 1986—and bombed the World Trade Center in 1993—and bombed the Khobar towers in 1996—and bombed the U.S. embassies in Kenya and Tanzania in 1998—and bombed the USS Cole in 2000. Diplomacy had also been the response when Iran issued a death decree on a British author for “un-Islamic” writings, threatening American bookstores and publishers associated with him, and thus denying Americans their sacred right to free speech. Throughout all of this, Americans had accepted that our leaders knew what they were doing with regard to protecting America from terrorism and other threats. On 9/11, Americans saw with brutal clarity that our actions had been somewhere between shortsighted and blind. The country and its president were ripe for a dramatic departure from the policies that had guided and failed America pre-9/11.

The only prominent group of intellectuals that offered a seemingly compelling alternative claiming to protect America in the modern, dangerous world (a standard by which neither pacifists nor Buchananite xenophobes qualify) were neoconservatives. . . .

Yaron Brook (PhD, finance, 1994, University of Texas at Austin) is president and executive director of the Ayn Rand Institute. He lectures on Ayn Rand’s philosophy of Objectivism, business ethics, and foreign policy at colleges, community groups, and corporations throughout the world. His articles have appeared in academic business journals, popular newspapers, and magazines. His numerous media appearances include interviews on Closing Bell (CNBC), the O’Reilly Factor and Glenn Beck (Fox News Channel), and Front Page with Allen Barton (Pajamas TV). As an entrepreneur, Dr. Brook co-founded the venture-capital consulting firm BH Equity Research in San Jose, California. And as an award-winning professor, he taught finance at Santa Clara University before joining ARI.

View all articles by Yaron Brook →

Alex Epstein is founder and president of the Center for Industrial Progress, a for-profit energy think tank. He is the author of Fossil Fuels Improve the Planet and the forthcoming book The Moral Case for Fossil Fuels. He is a regular columnist at Forbes.com, and his writings have been published in the Wall Street Journal, the San Francisco Chronicle, and Investor’s Business Daily, among many other publications. Alex's work has been featured in Rolling Stone, National Review, and Business-Superstar. He been a guest speaker at dozens of universities, including Stanford, Duke, Rice, and UCLA. He has debated Greenpeace, 350.org, and the Sierra Club on energy and environmental issues.

View all articles by Alex Epstein →
Letters and Replies, Summer 2007“The Balm for a Guilty Conscience”: Moral Paralysis, Appeasement, and the Causes of World War II

Acknowledgment: The authors would like to thank Onkar Ghate, senior fellow of the Ayn Rand Institute, for his invaluable editorial assistance with this project.

18 David Brooks, “A Return to National Greatness: A Manifesto for a Lost Creed,” The Weekly Standard, March 3, 1997.

46 For an excellent elaboration on this point, see John Lewis, “No Substitute for Victory: The Defeat of Islamic Totalitarianism,” The Objective Standard, Winter 2006.

51 For a discussion of this point, see “An Autobiographical Memoir,” by Irving Kristol, in Neoconservatism: The Autobiography on an Idea (Chicago: Elephant Paperback, 1999), pp. 8.

53 For further discussion of this point, see Yaron Brook and Elan Journo, “The Forward Strategy for Failure,” The Objective Standard, Spring 2007.