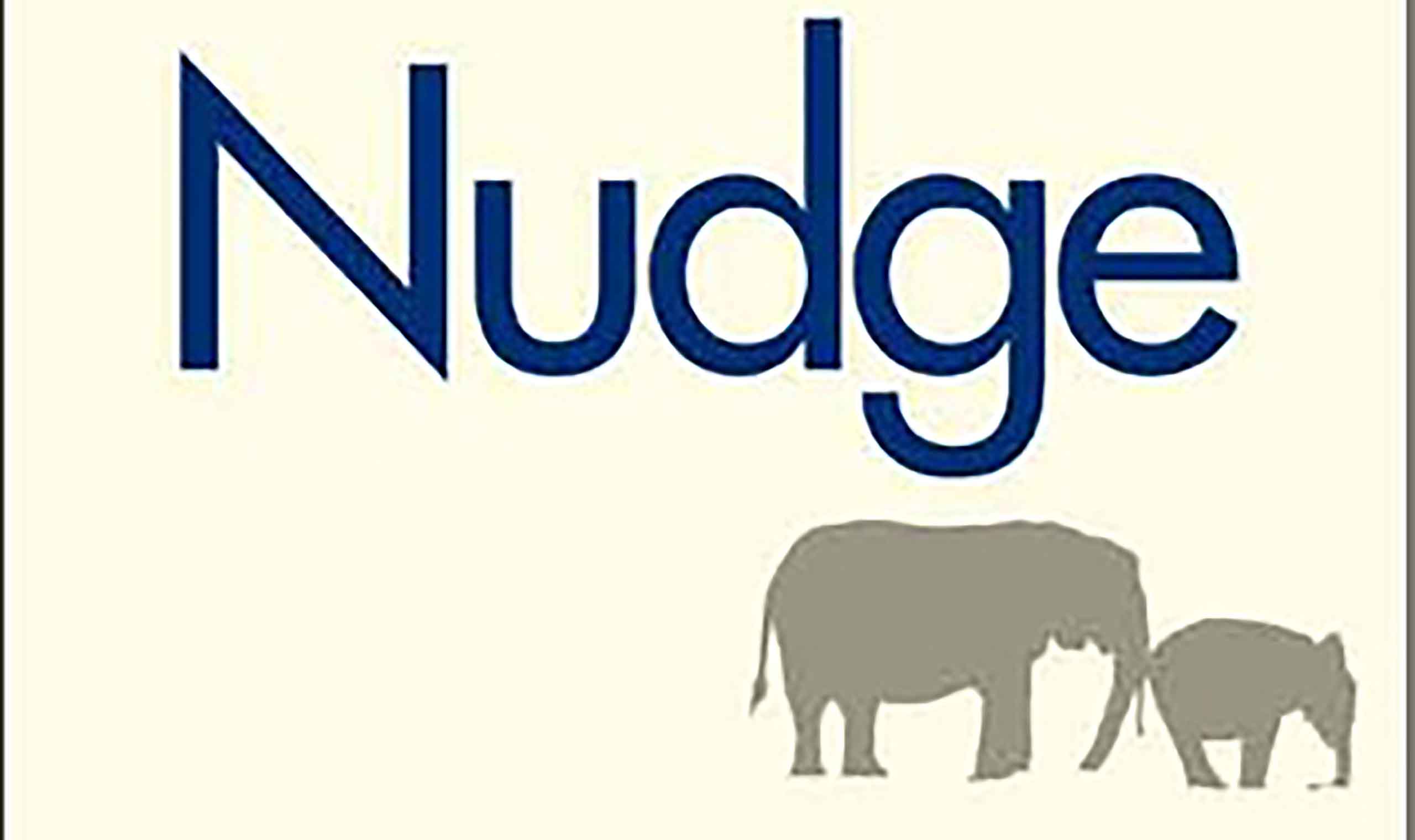 One of the distinguishing features of American life is the large degree of freedom we have in making choices about our lives. When choosing our diets, we have the freedom to choose everything from subsisting exclusively on junk food to consuming meticulously planned portions of fat, protein, and carbohydrate. When choosing how to conduct ourselves financially, we have the freedom to choose everything from a highly leveraged lifestyle of debt to a modest save-for-a-rainy-day approach. In every area of life, from health care to education to personal relationships, we are free to make countless decisions that affect our long-term happiness and prosperity—or lack thereof.

According to Richard Thaler and Cass Sunstein, professors at the University of Chicago and authors of Nudge: Improving Decisions About Health, Wealth, and Happiness, this freedom and range of options is problematic. The problem, they say, is that most people, when given the opportunity, make bad choices; although Americans naturally want to do what is best for themselves, human fallibility often prevents them from knowing just what that is. “Most of us are busy, our lives are complicated, and we can’t spend all our time thinking and analyzing everything” (p. 22). Average Americans, say Thaler and Sunstein, tend to favor the status quo, fall victim to temptation, use mental shortcuts, lack self-control, and follow the herd; as a result, they eat too much junk food, save too little, make bad investments, and buy faddish but useless products. Many Americans, according to the authors, are more like Homer Simpson (impulsive and easily fooled) than homo economicus (cool, calculating, and rational). “One of our major goals in this book,” they note, “is to see how the world might be made easier, or safer, for the Homers among us” (p. 22). The particular areas where these Homers need the most help are those in which choices “have delayed effects . . . [are] difficult, infrequent, and offer poor feedback, and those for which the relation between choice and experience is ambiguous” (pp. 77–78).

The central theme of Nudge is the idea that government and the private sector can improve people’s choices by manipulating the “choice architecture” they face. As Thaler and Sunstein explain, people’s choices are often shaped by the way in which alternatives are presented. If a doctor explains to his patient that a proposed medical procedure results in success in 90 percent of cases, that patient will often make a different decision from the one he would have made if the doctor had told him that one in ten patients dies from the procedure. Free markets, the authors argue, too often cater to and exploit people’s tendencies to make less than rational choices. Faced with choices about extended warranties or health care plans or investing in one’s education, only the most exceptional and rational people will make the “correct” choices. Most people, the authors argue, cannot avoid the common foibles of bad thinking; thus we ought to adopt a better way of framing and structuring choices so that people will be more likely to make better decisions and thereby do better for themselves. Hence the title: By presenting information in a specific way, “choice architects” can “nudge” the chooser in the “right” direction, even while maintaining his “freedom of choice.”

This “nudge” tactic is part of a broader approach that Thaler and Sunstein call “libertarian paternalism.” Qua “libertarian,” the idea is to leave people “free” to make their own good or bad decisions—as opposed to forcing them via old-school social planning or pervasive government controls. Qua “paternalist,” the idea is to guide people’s decisions by “nudging” them in a manner consistent with that “freedom”—as opposed to the laissez-faire approach of letting them make whatever choices they like regardless of the results on their lives.

Thaler and Sunstein oppose both New Deal liberalism and choice-maximizing capitalism. On the issue of retirement savings, for example, they oppose both the social planners who would impose a “one size fits all,” nationally mandated retirement plan for all citizens—and the choice maximizers who would leave each citizen free to choose a retirement plan, or none at all, according to his own judgment. The authors believe that both approaches entail undesirable elements. In the former case, individual freedom is curtailed. In the latter case, the Homer Simpsons will save “too little” and, operating on mental inertia, forget to increase their retirement savings as their pay increases. The “nudge” approach the authors advocate would entail making enrollment in company matching 401(k) plans the default option. Then, the “right result” happens for those who would otherwise forget to choose or who might otherwise make the “wrong” choice, and those who want to make their own choice can take action to opt out of the default setting.

The authors spend the bulk of the book explaining how to apply “nudges” and “choice architecture” to a wide array of policy issues. Their stated goal is to show Americans a “third way” between post-New Deal “command-and-control regulation” and “freedom of choice” laissez-faire (which they mistakenly identify with the Republican party). Thaler and Sunstein present their libertarian paternalistic nudging as a compromise between liberalism and conservatism, and thus as a means of transforming seemingly intractable policy problems into broadly satisfying solutions.

Their approach is flawed on a number of levels.

Throughout the book, the authors conflate the way that private institutions shape choices with the way that governments do. They treat as essentially the same a corporation that offers voluntary retirement packages to its employees and a government that offers Medicare drug plans to citizens. There is a fundamental difference, however, between choices contemplated under voluntarily chosen arrangements in the private sector and choices that are controlled by forcible interventions in the marketplace in the form of government welfare programs. Even if citizens may “opt out” of Medicare Part D, their available private options have been forcibly curtailed by the price and availability distortions that result from the very existence of Medicare.

While seeking to make government programs more efficient, Thaler and Sunstein avoid the more fundamental issue of whether such programs are morally justified in the first place. Because they never question the propriety of a rights-violating government, they accept as a given (and explicitly defend) welfare programs, workplace health and safety regulations, Federal Trade Commission imposed “cooling off” periods for door-to-door sales, mandatory and standardized disclosure of mortgage costs by lenders, mandatory installation of replacement warning lights on air conditioner filters, new municipal taxation to raise funds to pay teenage girls to avoid pregnancy, and so on.

Although some of the so-called nudges advocated in the book would not violate rights, the authors are unable (or unwilling) to differentiate between those that would and those that would not. And not only do they fail to identify the relevant principle distinguishing market incentives from government force; they admit that once we accept any degree of paternalism, there are no “hard-and-fast stopping points” by which to determine when we should merely “nudge” and when we should fully remove choices (p. 248). In the end, the authors concede that some regulations that “impose flat bans” are acceptable and justifiable. The authors further confess that knowing when to “nudge” and when to regulate is a “tricky” matter, one that might only reduce to personal preference (p. 251).

The book’s deepest flaw, however, is methodological. The authors propose that “if people can rely on their Automatic System without getting into terrible trouble, their lives should be easier, better, and longer” (p. 22). But reliance on one’s “Automatic System” is precisely the problem that the authors purport to recognize. To adopt their “nudge” approach is to further indulge the mental drift of the Homer Simpsons among us—and to leave them at the mercy of “choice architects.”

There is, to be sure, definite value in understanding the typical biases and erroneous rules of thumb that people use when they are operating on cognitive autopilot. The solution, however, is not to advocate veiled government coercion, but to advocate a system in which people are fully free to experience the consequences of their choice to think or not. A large part of the reason so few people think clearly about choices and consequences is that government intervention has eliminated the possibility of choices or shielded people from their consequences.

If Thaler and Sunstein want to help people make better choices, they should write a book explaining what is involved in making rational, long-range, self-interested decisions. Given that they regard Americans as Homer Simpsons, however, it is unlikely that this will occur to them.

Although Nudge has no positive redeeming qualities, there is some value in what it reveals about contemporary politics. Thaler and Sunstein have unwittingly exposed an increasingly popular approach to whittling away freedom in America. As informal advisors to Barack Obama, the authors have no doubt helped shape many of his proposals. Many Republicans have also embraced the “nudge” approach—from school choice programs to Medicare to cap-and-trade environmental laws. Those who wish to see firsthand the flawed logic behind these proposals—and the modus operandi of today’s savvier socialists—will find value in Nudge.

View all articles by Eric Daniels →
Review: Mugged by Reality, by John AgrestoReview: The Terrorist Watch, by Ronald Kessler
Return to Top