From John Lewis and Paul Saunders

NOW IS THE TIME FOR ALL GOOD MEN TO MAKE THEIR VOICES HEARD. 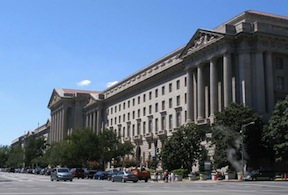 On July 11, 2008 the Environmental Protection Agency of the United States issued an Advance Notice of Proposed Rulemaking (ANPR). This document details how the EPA intends to claim unlimited power over the life of every American.

The EPA action follows a US Supreme Court Decision ruling that defined carbon dioxide as a "pollutant." This ruling defies logic, nature, and common sense. The Canadian Government has openly declared that carbon dioxide is a vital "nutrient"—without it, plants die. It is a natural compound that we exhale. It has always existed in nature, often at far higher levels than today. If carbon dioxide is a pollutant, then all human life is pollution.

The EPA's document starts with a clear warning that using the Clean Air Act to regulate CO2 will lead to uncontrollable growth of the agency’s power:

"EPA’s analyses leading up to this ANPR have increasingly raised questions of such importance that the scope of the agency’s task has continued to expand. For instance, it has become clear that if EPA were to regulate greenhouse gas emissions from motor vehicles under the Clean Air Act, then regulation of smaller stationary sources that also emit GHGs [Greenhouse Gases]—such as apartment buildings, large homes, schools, and hospitals—could also be triggered. One point is clear: the potential regulation of greenhouse gases under any portion of the Clean Air Act could result in an unprecedented expansion of EPA authority that would have a profound effect on virtually every sector of the economy and touch every household in the land." (ANPR p. 5)

The ANPR also includes the following, in a comment by the Department of Agriculture:

"many of the emissions are the result of natural biological processes that are as old as agriculture itself. For instance, technology does not currently exist to prevent the methane produced by enteric fermentation associated with the digestive processes in cows and the cultivation of rice crops; the nitrous oxide produced from the tillage of soils used to grow crops; and the carbon dioxide produced by soil and animal agricultural respiratory processes. The only means of controlling such emissions would be through limiting production, which would result in decreased food supply and radical changes in human diets." (ANPR pp. 66-67)

Under these rules, the EPA will have the power to ration food production, to approve its content, and to control its distribution.

This is only the tip of an iceberg of massive government power, about to be unleashed against every American. The EPA intends, for instance, to take authority over transportation—including motor vehicle emissions testing, shipping, and railroads; to assume local building permit authority; to set emissions standards for lawnmowers; and to regulate nearly two and a half million buildings with natural gas heating..

To make matters worse, the U.S. Senate is now considering a bill, the Lieberman-Warner Climate Security Act of 2007 and 2008: http://www.govtrack.us/congress/bill.xpd?bill=s110-2191.This bill will add the following to the powers of the EPA:

The Lieberman-Warner Senate bill, and its equivalent in the U.S. House of Representatives, are not part of the EPA document, and not part of the EPA request for comment. But such legislation is part of the total environmentalist political agenda. It gives us an idea what is coming if we do not make our voices heard and end these plans to destroy our freedom and our lives.

We condemn and oppose all such outrageous attacks on American life, liberty, and property.

THE EPA HAS INVITED PUBLIC COMMENT ON ITS "ADVANCE NOTICE OF PROPOSED RULEMAKING."

To make our voices heard, we have transmitted a letter with comments to the EPA. We urge you to do the same.

We invite you to:

1.  READ OUR COVER LETTERTO THE EPA, WHICH STATES OUR SIX REASONS FOR CATEGORICALLY OPPOSING THE EPA'S PROPOSED RULES:

2. READ OUR COMMENTS TO THE EPA, "THE EPA'S ADVANCE NOTICE OF PROPOSED RUINATION," WHICH FURTHER EXPLAINS OUR POSITION:

For a longer exposition of the reasons behind these comments, see the article by John David Lewis, "History, Politics, and Claims to Man-made Global Warming," forthcoming in the journal Social Philosophy and Policy vol. 26 no. 2; to be published as an edited volume "Environmentalism," edited by Ellen-Fraenkel Paul, Jeff Paul, and Fred Miller (Cambridge University Press, forthcoming).

3. READ THE EPA DOCUMENT (HERE ARE SOME EXCERPTS) AND ASK YOURSELF: DO YOU AGREE? IF SO, THEN SEND YOUR OWN LETTER TO THE EPA!

4. GO TO OUR SAMPLE LETTER, WHICH YOU MAY COPY, EDIT, AND SIGN—OR EXPRESS YOUR OWN VIEWS IN YOUR OWN LETTER.

5.  SEND YOUR LETTER, EMAIL, OR WEB COMMENTS TO THE EPA.

Here's where one can view comments already submitted:http://www.regulations.gov/search/search_results.jsp?css=0&&Ntk=All&N...

Or, send your comments by one of the following methods:

If these plans are not stopped, we may eke out our lives chewing the equivalent of Ma Chalmers’ moldy soybeans.

Ma Chalmers is a character in Ayn Rand's epic novel Atlas Shrugged (NY: Signet, 1996), 858, 862. Because government bureaucrats had taken control of all transportation, and arbitrarily decided that soybeans were more important than the wheat crop of Minnesota, that wheat crop—vital to human survival—was left to rot. Millions of dollars in tax money had been given to Ma Chalmers' "Project Soybean," a sociological project intended to change people's behavior, “for the purpose of reconditioning the dietary habits of the nation.” A bureaucrat explained the government's action: “Well, after all, it is a matter of opinion whether wheat is essential to a nations' welfare—there are those of more progressive views who feel that the soybean is, perhaps, of far greater value [than grain]." As a result, the wheat rotted and the soybeans were too moldy to eat.

The Supreme Court decision and the Executive Order are discussed in the ANPR, pages 78-83.

The Canadian Government statement on carbon dioxide is by the Ontario Ministry of Agriculture, which advised that "growers should regard CO2 as a nutrient." Studies have shown that plants suffer and die when CO2 falls below 200 parts per million. The present level is about 380 ppm. Early in the Earth's history, CO2 has been as high as 5,000 ppm. Plant life grew vigorously when levels were between 2,000 and 1,000 ppm.