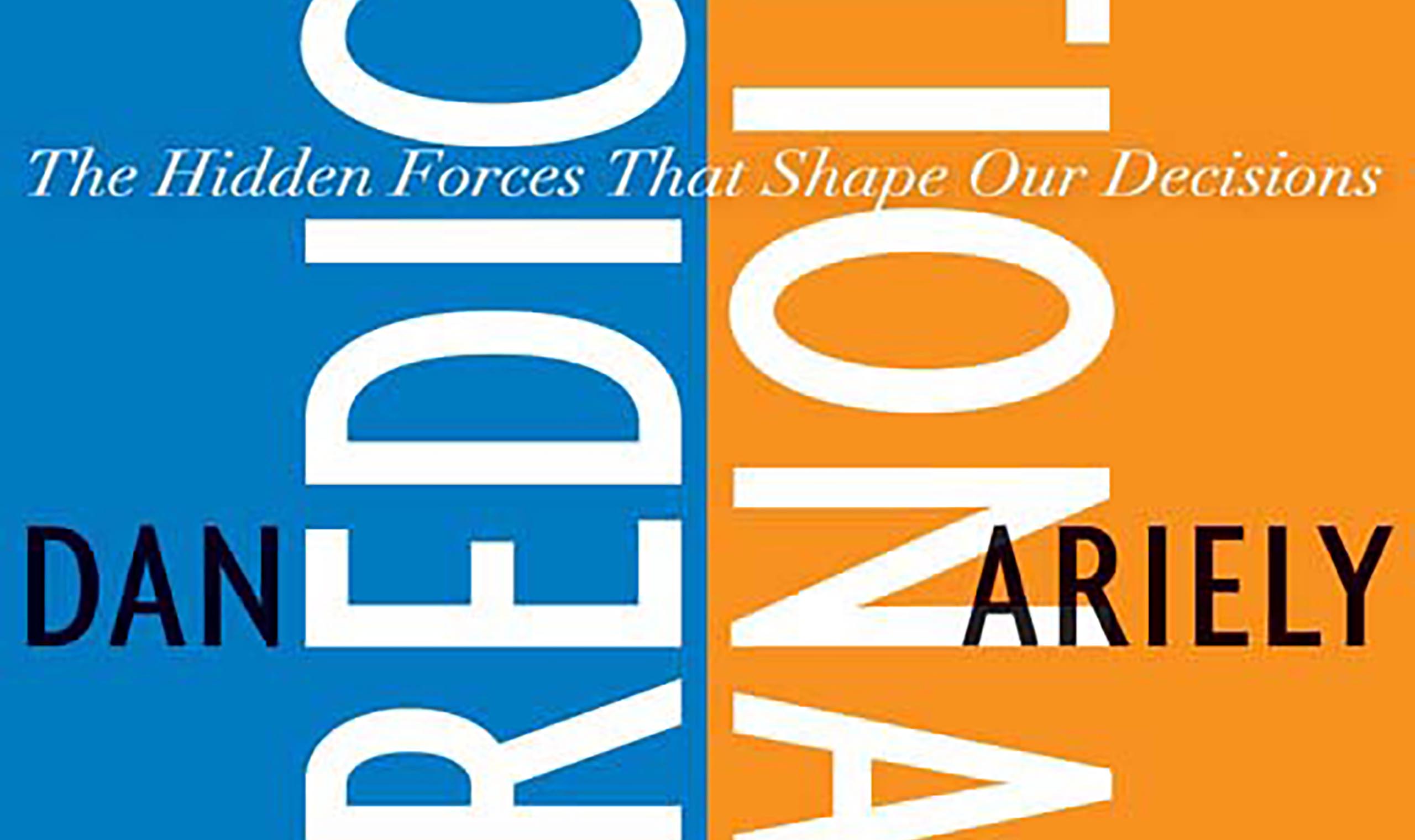 For years, conventional economists have argued that average people in the marketplace make economic decisions using careful calculation and deliberation to arrive at the best possible outcome. They gather price information, compare features, weigh advantages and disadvantages, and exercise logical reasoning to maximize their own happiness and wealth. In short, conventional economists argue that most people generally behave rationally.

Not so, say proponents of an emerging field in academic economics. Expressing frustration with the “naïve psychology” of “standard economics” (p. 239), so-called “behavioral economists” study economic behavior through the lens of modern psychology. Viewing the field of economics from the perspective of “how people [do] behave, instead of how they should behave” (p. 239), behavioral economics dispenses with the conventional presumption that people are rational actors and views them as irrational reactors. One of the field’s leading figures, Dan Ariely, a professor at Duke University’s Fuqua School of Business, attempts to explain its academic findings in Predictably Irrational.

With Predictably Irrational, Ariely seeks “to help you fundamentally rethink what makes you and the people around you tick” (p. xii). Describing dozens of field experiments, Ariely explores the phenomenon of people making the same mistakes time and again in predictable ways, such as buying warranties they do not need, succumbing to peer pressure, and spending more money on expensive indulgences than they budget for. In short, says Ariely, people behave irrationally, but predictably so.

Each of Predictably Irrational’s thirteen chapters focuses on one particular irrational way in which people make decisions, describing the experiments that Ariely and his colleagues constructed and carried out to demonstrate the predictability of this behavior. For example, in the book’s opening chapter, the author describes how his test subjects (mostly college students from his home institution) could be driven to prefer product A over product B if they were given the choice between A, B, and a similar but inferior version of product A instead of a choice between just A and B. In another chapter on the mysterious power of “free” products, he describes how test subjects who preferred Lindt chocolates to Hershey’s Kisses by roughly 3-to-1 when they were priced at 15 cents and 1 cent respectively, changed their preferences to 1-to-2 when each was discounted by 1 cent. In other words, when priced at 14 cents and 0 cents respectively, people disproportionately changed their preference to the free Hershey’s Kiss, disregarding their preference and the fact that the cost difference in each case—14 cents—is exactly the same. These results lead Ariely to suggest that “free” is a price that causes people to behave irrationally.

The “one main lesson from the research described in this book,” Ariely informs us, “is that we are pawns in a game whose forces we largely fail to comprehend” (p. 243). Although we may think we are in control of how we make market calculations and economic decisions, he argues, we are actually driven by perceptual reactions, ingrained habits, and “decision illusions” (such as the mysterious power of “free” products) much more than we realize.

This argument, however, which is the central theme of Predictably Irrational, amounts to a haphazard collection of isolated observations rather than a systematic presentation of integrated facts. In the tradition of Steven D. Levitt and Stephen J. Dubner’s Freakonomics and Malcolm Gladwell’s Blink, Ariely shrugs off the burden of a fully developed, philosophically grounded thesis and strives primarily to shock and entertain the reader both with funny anecdotes about how people act and with counterintuitive conclusions about what these anecdotes mean. His style is chatty and readable, but often at the expense of intellectual rigor. Although it contains a few interesting points here and there, the book is riddled with pedestrian insights. For example, Ariely spends an entire chapter ploddingly explaining that there is a phenomenon known as the placebo effect. He also reports on research showing, among other things, that many people will cheat when given a chance, that teenage boys will make riskier decisions when they are sexually aroused, and that people are more likely to steal minor office supplies than cash.

Consider, for example, the inherent contradictions in Ariely’s discussion of the nature of the “decision illusions.” He tells us that our “predictable irrationality” is a consequence of unavoidable illusions that thwart our thinking, illusions that exist “because of the basic wiring of our brains” (p. 239). Is this conclusion an illusion caused by the basic wiring of Ariely’s brain? He tells us that “stripping away our preconceptions” is impossible. Is that one of his preconceptions? He says “we are trapped within our [own biased] perspective, which partially blinds us to the truth” (p. 172). Is that his biased perspective? And does it partially blind him to the truth?

Further engaging in self-contradiction, Ariely jauntily insists that we can do better if we try. Many of the chapters conclude with advice and admonishments about how, for example, we can focus our minds to make ourselves “aware that we are prone to wrong decisions when gripped by intense emotion” (p. 105) or “bring quite a bit of the old civility back to our lives” (p. 88). Thus Ariely simultaneously holds that we are wired to be irrational and that we can and should make an effort to be more rational. Throughout the book, he proposes various schemes and solutions to this dilemma, and, in the end, he calls for “new strategies, tools, and methods to help us make better decisions and improve our overall well-being” (p. 241).

This contradiction between determinism and free will, or fatalism and optimism, is the result of a deeply flawed understanding of rationality. Ariely never explicitly defines rationality, but he claims that being rational means that “we know all the pertinent information about our decisions, that we can calculate the value of different options we face, and that we are cognitively unhindered in weighing the ramifications of each potential choice” (p. 239). Although he believes his experiments show that our irrational behaviors are “systematic and predictable” (p. 239), his working definition of rationality is not that people are capable of making rational choices, but that they do so infallibly. Because people are not infallible, he concludes, they must be inherently irrational. But rationality does not mean infallibility; it means that one is capable of choosing to observe the available facts and go by logic and that one does so. Nor does it preclude the possibility of mistakes; rather, it is the means of detecting and correcting mistakes.

In light of our inherent “irrationality” (read “fallibility”), what could give us hope? Ironically, all of his suggestions for improving our decision-making involve tricking us to “do good” or to “choose well” by playing on the very irrational biases that he alleges harm us in the first place. For example, he suggests that credit card companies issue “smart” cards with a built-in spending “governor” to prevent us from overspending, or cards that would trigger an automatic email to our spouses when we overspend.

Would that Ariely confined his contradictory theory and muddled advice to the personal and corporate levels. Unfortunately, he does not. He suggests that we employ the power of government to overcome our individual fallibility by forcing us as a group to make better decisions. For instance, because people irrationally crave anything that is labeled “free,” Ariely believes that the government should provide (among other things) free health screenings and automobile inspections (pp. 62–63). “With society’s essentials,” he notes, “such as health care, medicine, water, electricity, education, and other critical resources,” we must accept that government will “play a larger role in regulating some market activities, even if this limits free enterprise” (p. 48). We must accept a “compromise between authoritarianism and . . . [the] complete freedom to fail” (p. 119). Government, he says, must “restrain our self-destructive behaviors” (p. 118).

This, of course, is the very recipe for disaster that led to the rise of totalitarianism (e.g., the USSR) and caused the economic crisis we face today.

In the end, Predictably Irrational amounts to yet another effort to justify government intervention in the economy and our lives on the grounds that we are incapable of taking care of ourselves because we are inherently irrational. Just as Richard H. Thaler and Cass R. Sunstein have called for the government to “nudge” us toward “better” decisions (see my review of their book Nudge: Improving Decisions About Health, Wealth, and Happiness in TOS Fall 2008), so Ariely calls for government to predict our irrationalities and preempt them. Perhaps he, too, will become an informal advisor to President Obama (as Thaler has) or one of the president’s official “czars” (as Sunstein has). Let us hope not.

View all articles by Eric Daniels →
Religion vs. Subjectivism: Why Neither Will DoReview: Concierge Medicine, by Steven D. Knope
Return to Top