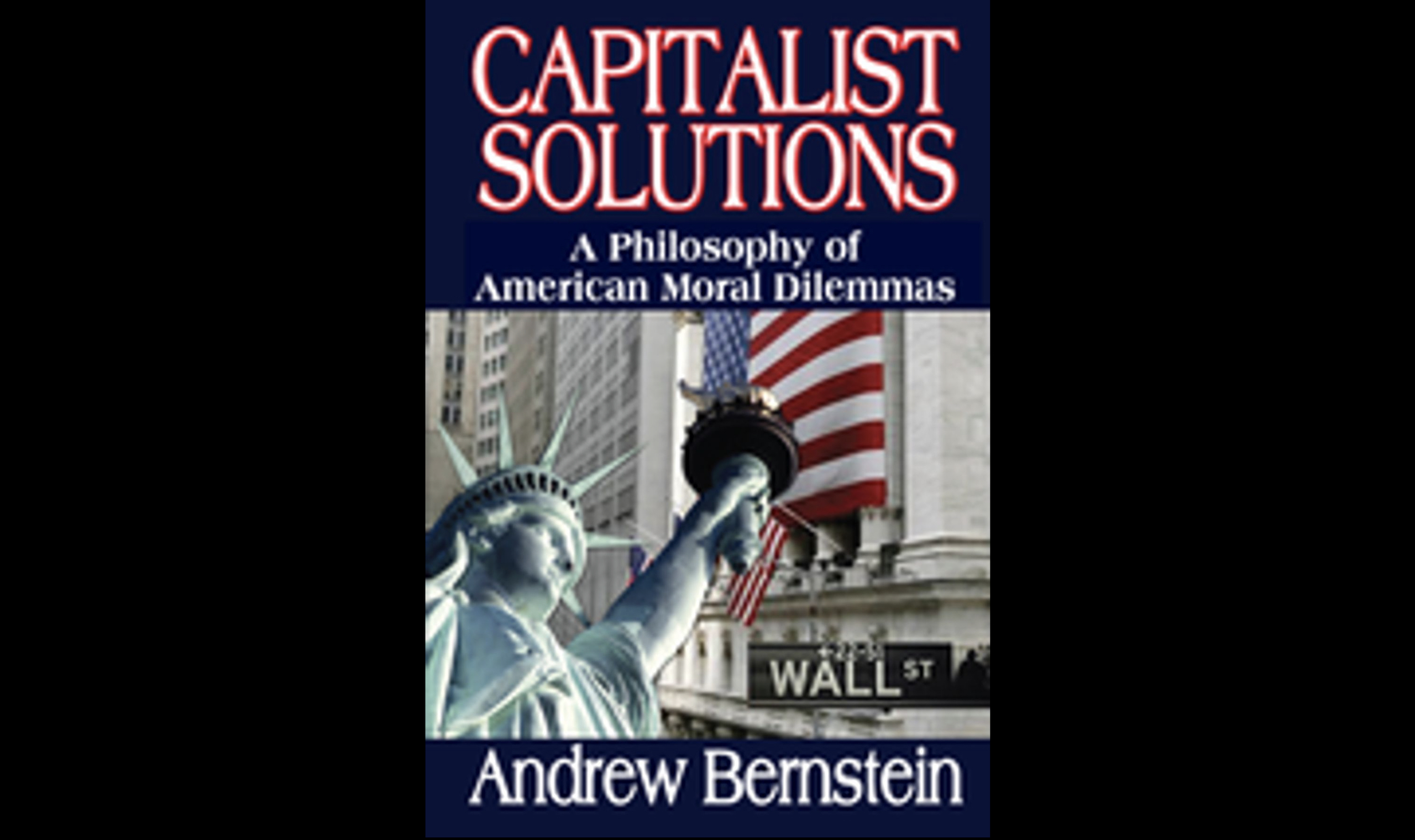 How often does an author defend the right of citizens to own guns and the right of homosexuals to marry—in the same book chapter? In his new book Capitalist Solutions, Andrew Bernstein applies the principle of individual rights not only to “social” issues such as gun rights and gay marriage but also to economic matters such as health care and education and to the threat of Islamic totalitarianism. Bernstein augments his philosophical discussions with a wide range of facts from history, economics, and science.

The release of Capitalist Solutions could not have been timed more perfectly: It coincides with the rise of the “Occupy Wall Street” movement that focuses on “corporate greed” and the alleged evils of income inequality. Whereas many “Occupiers” call for more government involvement in various areas of the economy—including welfare support and subsidies for mortgages and student loans—Bernstein argues forcefully that government interference in the market caused today’s economic problems and that capitalism is the solution.

The introductory essay reviews Ayn Rand’s basic philosophical theories, with an emphasis on her ethics of egoism and her politics of individual rights. Bernstein harkens back to this philosophical foundation throughout his book, applying it to the issues of the day.

The introduction illustrates the essential nature of capitalism by contrasting the life-promoting value of liberty throughout American history with the life-crushing evil of totalitarian collectivism elsewhere. Whereas “the foundation of the American Republic initiated a moral revolution,” Bernstein writes, the “free-thinking mind, the fundamental source of new ideas and creations in every field, is stifled under all forms of statism” (p. 18). Returning to history covered in his previous book, Capitalism Unbound, Bernstein reviews the magnificent achievements of great American producers such as Thomas Edison and Henry Ford as well as innovative social scientists and artists such as Mark Twain. Then Bernstein turns his attention to statism in many of “its ghastly iterations,” including the brutal regimes of Hitler, Stalin, and Mao (pp. 22–25).

The remainder of the book applies the foundational principles of capitalism and individual rights to the contemporary issues of environmentalism, Islamic totalitarianism, health care, abortion, education, gun ownership, the drug war, immigration, and gay marriage. I’ll discuss Bernstein’s treatment of a few of these topics to convey the essence of the book.

In his first (and longest) issue-oriented essay, “Repudiating Environmentalism in Theory and Practice,” Bernstein explains four central points especially well. First, the term “environment” refers to the environment of particular living things, and improving the human environment comes only with advancing technology and economic prosperity. As an example, Bernstein explains how sewer treatment, water chlorination, and dams vastly improve the human environment by providing people with clean water.

His second key point is that environmentalists misconstrue the meaning of “environment” because they regard untouched nature as having intrinsic value. Bernstein elaborates, “The claim that nature has ‘intrinsic value,’ that it is worthy of our esteem, even veneration, quite apart from any utilitarian purpose it might serve, is the key to understanding environmentalism. Man, on this view, is an intruder . . . who despoils the sacred natural environment he inhabits” (p. 44).

Third, Bernstein points out that the notion that man and his creations fundamentally lie outside the natural world is absurd. Man’s intelligence, with the productive capacity it enables, constitutes “his naturally developed means of survival” (p. 47).

Fourth, says Bernstein, as the great economist Julian Simon explained, the “ultimate resource” is not any mineral or plant, but the human mind and its limitless capacity to expand human knowledge (p. 50). Bernstein reviews how human ingenuity turned previously worthless substances such as oil and quartz sand into life-advancing products. Earth and “the solar system’s other planets,” he writes, “are solidly packed balls of matter, every ounce of which is a potentially usable natural resource” (p. 54). The conclusion arising from Bernstein’s discussion of environmentalism is that people rightly employ their intelligence to reshape the resources around them to improve the human environment.

In his chapter on the Islamist threat to America, Bernstein argues that Islamic totalitarians seek to destroy America, not because of America’s presence in the Middle East or any action of America’s people or government, but because Islamists “are religious zealots, seeking to establish a global Islamist theocratic dictatorship, similar to that in Iran” (p. 71). He demonstrates this point by reviewing key aspects of Islamic history from Mohammed’s formative example to modern-day terrorist attacks. Although America is far superior to the Islamists in terms of economic and military might, notes Bernstein, “America lacks the moral certitude, the will, to wage all-out war against those attacking it” (p. 90), and he exhorts us to rediscover that moral will.

Turning to health policy, Capitalist Solutions describes how government intervention in medicine, particularly in areas of tax policy, Medicare and Medicaid, and licensing, caused the current problems of exploding costs and limited access. Bernstein offers several important policy suggestions for moving health care toward a free market, including this particularly intriguing one: “[A]t the age of sixty-five, every individual should be given the opportunity to sign away his legal rights to Medicare and Social Security in exchange for tax-exempt status for the rest of his life on all income from any source whatever . . .” (p. 112).

In the chapter on abortion rights, Bernstein explains the key distinction between an actual person and a potential one, “between a fully formed, biologically developed individual” and undeveloped “tissue living dependently within the body of another” (p. 127). He concludes: “[H]uman personhood requires a full organic development, to be a bodily individual, not a biological growth or dependency” (p. 128).

In his discussion of education, he offers a refreshingly bold proposal: Auction off the government-run schools (after due notification to all who would be affected), and move to a fully free market in education. Bernstein offers compelling reasons why doing so would dramatically improve the quality of education, largely by empowering those who finance education to choose where to put their money. He adds a historical dimension to his case by pointing out that private education thrived in early America, fostering a remarkably literate and intellectually creative citizenry.

Bernstein’s discussions of other topics follow a similar pattern: He describes the central debate, summarizes relevant findings from history and other fields of knowledge, argues that the solution to the problem is the application of the principle of individual rights, and offers specific proposals to that effect.

Unfortunately, although Capitalist Solutions offers many compelling arguments and historical insights, it contains a number of troubling formulations and gives short shrift to a few crucial subjects.

For instance, some of the book’s remarks about egoism contradict the principle of egoism. Bernstein writes, “If moral philosophers endorsed the probity of attaining life’s important values, and exhorted ‘sacrifice’ of only nonessentials, then they would be egoists, not altruists” (p. 13). Egoism, however, eschews all sacrifice, leaving no room for “nonessential sacrifice.” Bernstein also writes, “Regarding the critical contrast between helping others and sacrificing the self: the one is life-promoting, and a consequent good; the other is life-harming, and a consequent evil” (p. 14). But helping others can be either life-promoting or life-harming, depending on one’s values and the nature and context of the aid.

Similarly, on the subject of abortion, Bernstein makes the following incongruous claims: “Philosophers can argue regarding the exact moment human life begins,” and that point might be “during the last stages of pregnancy” (p. 130)—and the concept of rights “is rationally inapplicable to . . . biological dependencies within a woman’s body” (p. 132).

Likewise, on the subject of climate change, the book argues: “To fully, definitively defeat attempts to reduce [greenhouse gas] emissions by means of coercive governmental legislation, its underlying theory [of human-caused climate change] must be disproven” (p. 55). Yet, according to the logic of Bernstein’s broader case, whatever the science may show about global warming, the proper governmental policy is to protect individual rights, leaving people free to innovate and develop solutions to whatever problems may arise.

Although Bernstein discusses the relationship between capitalism and individual rights, he does not make sufficiently clear why the concept of capitalism encompasses not only economic freedom, but also a particular approach to foreign policy, abortion, gay rights, and the like. Readers who do not already understand that capitalism is not merely an economic system but also, and more broadly, a social system, may be left wondering why these latter subjects were included in the book. And surprisingly (given the title of the book and the time of its publication), Capitalist Solutions offers no discussion of the mortgage meltdown and little discussion of the entitlement crisis. The text also omits citations, as did Capitalism Unbound.

Such flaws and omissions aside, however, Capitalist Solutions provides pithy and passionate arguments grounded in individual rights and informed by extensive research in history, economics, and science. Bernstein’s book offers more than just a collection of essays on assorted issues of the day. It offers a powerful way of thinking about politics and economics that is sorely needed in today’s world.