The Intouchables. Written by Olivier Nakache and Eric Toledano. Starring François Cluzet and Omar Sy. Distributed by the Weinstein Company. Distributed by Gaumont. Rated R for language and some drug use. Running time: 113 minutes. 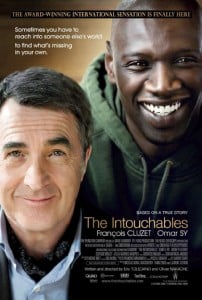 Why would a quadriplegic man confined to a wheelchair and largely dependent on others hire as his primary caregiver a man who lacks relevant experience, spent six months in jail for robbery, and showed up to the interview only in order to continue receiving welfare payments? The answer is that such a caregiver would be unlikely to fuss over or pity his employer.

This arrangement is the premise of The Intouchables, a French film loosely based on the lives of Philippe Pozzo di Borgo and his caregiver, Abdel Sellou (whose alter ego in the film is named Driss).

Philippe is a wealthy businessman who suffered a paragliding accident, leaving him mostly immobile; Driss is an aimless miscreant. But Philippe sees in Driss something more than a troubled past: He sees a good-hearted, generous, fun-loving man with the physical strength to do the job that Philippe needs done.

Driss becomes a competent caregiver to Philippe, and the two men become more than just business associates; they become close friends. This friendship is the centerpiece of the film—and it is beautifully portrayed by the lead actors, François Cluzet as Philippe and Omar Sy as Driss. The scenes are alternately deeply moving and raucously funny—as when Driss shaves Philippe’s beard into a series of hilarious mustaches. Both actors face unique challenges in portraying the interactions between a caregiver and a disabled man, and they do so with grace and respect.

Especially wonderful about the film is how the two men help each other come to grips with their personal problems. Driss needs to become more responsible with his life, while Philippe needs to overcome his hang-ups about pursing a romantic relationship. Thus, each man is deficient in a certain respect, and each helps the other overcome or at least compensate for that deficiency.

The Intouchables is perhaps the finest film on the theme of friendship I have ever seen.