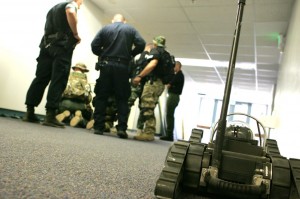 A young robotics company has found that keeping people out of harm’s way is great business. The company, Robotex, builds robots designed to (among other things) help emergency responders handle dangerous situations via remote control.

Before Robotex robots, law enforcement officers had to search for armed suspects in person. Now, the policy of the Oakland, CA SWAT team is to let a robot do the initial sweep. If officers need to “enter” a building in which they think there might be an armed criminal or other danger, they begin by sending in a remote-controlled AVATAR robot equipped with cameras. In one instance:

A SWAT Officer drove the robot towards [a suspect’s] home from the safety of an armored vehicle. The robot mounted a curb, sped through wet grass in the front yard, and finally climbed two stairs before entering through the home’s front door. The robot proceeded to move up another staircase and through each room of the home, navigating over toppled pieces of furniture, clothing, food, and drug paraphernalia. On several occasions, the Officer activated the AVATAR’s pan-tilt-zoom camera to scan for dangerous ordnance and additional suspects. Using this method, the SWAT Officer [controlling the robot] identified several shotguns in a bedroom, and he was able to clear the rest of the house rapidly.

Such useful robots have been a part of science fiction for years, but actually building them is no trivial matter. In 2006, the year before Robotex was founded, one state-of-the-art humanoid robot crumpled on stage while trying to demonstrate its ability to climb stairs. Last year, a prototype version of a robot produced by Boston Dynamics did a better job, but only by using a wall for support.

To put what Robotex is doing into perspective, Boston Dynamics received an $11 million government contract for eight robots. So far, Robotex has raised a comparable amount from venture capitalists, and they’ve used their money to produce enough life saving robots for multiple law enforcement agencies in almost every state to own one.

Robotex operates more efficiently and effectively in large part because it develops its robots with private money for commercial use. Instead of designing robots with or to gain big government contracts or grants, Robotex engineers build affordable robots that solve real-life problems and generate revenue.

Robotex’s owners know that if their robots function poorly or cost too much they will not sell, so Robotex aims to keep their robots simple, functional, and economical. (For example, Robotex robots move around on treads instead of legs, and their mechanical parts are molded out of durable plastic rather than aluminum.)