The Federalist Essays Brought the U.S. Constitution to Life - [TEST] The Objective Standard 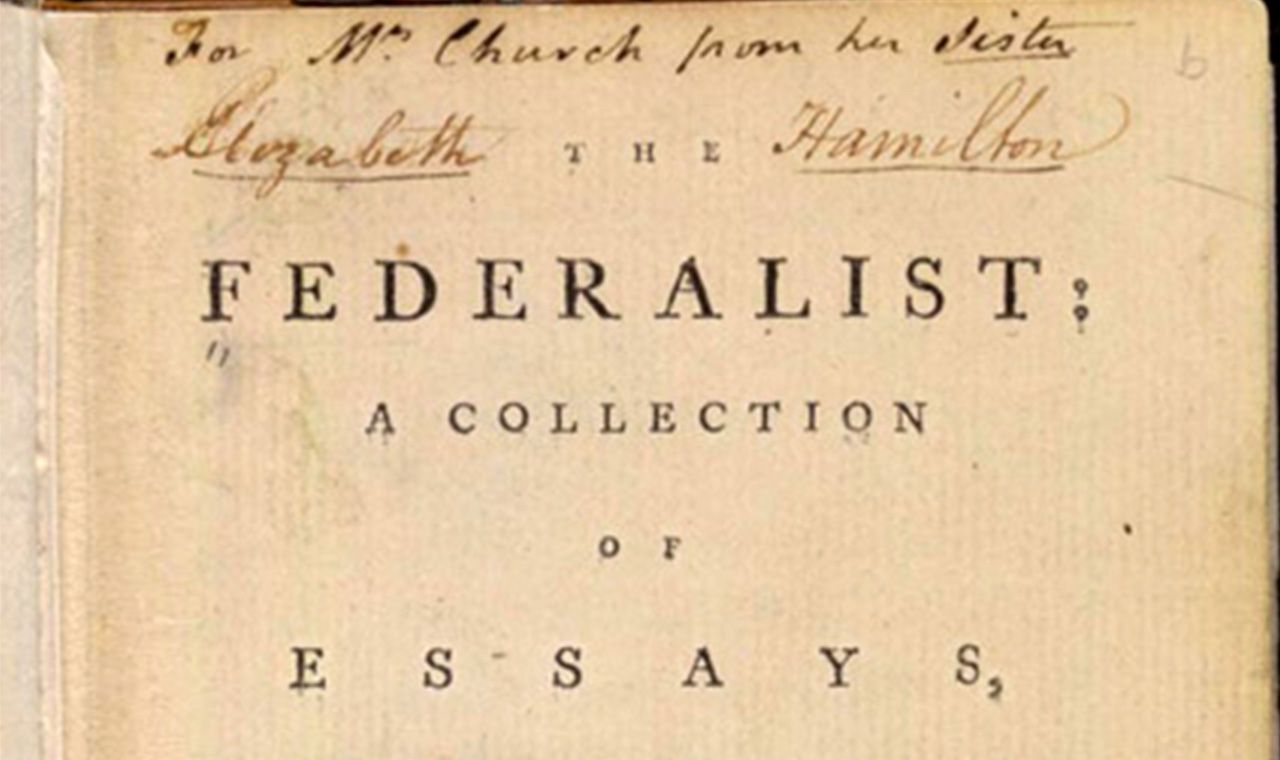 The Federalist Essays Brought the U.S. Constitution to Life

On October 27, 1787, Alexander Hamilton published the first of eighty-five Federalist essays. For six years, the country had been held together by a weak thread: the Articles of Confederation. Four years after the Revolutionary War had ended, the states still had no means of servicing their wartime debt, of resolving interstate currency and trade disputes, or of formally aligning against new foreign threats. Hamilton (along with many other great founders) had helped to create a solution to these ills: the United States Constitution. Although it had been signed by thirty-eight of the forty-one delegates present at the Constitutional Convention, the Constitution still had to be ratified by at least nine of the thirteen states. The opposition was swift and vocal. In response, Hamilton would launch the Federalist essays to defend the Constitution and secure votes for ratification.

Just ten days after the Constitution was signed, its opponents began publishing Anti-Federalist essays intended to stoke opposition and waylay ratification. They argued that America should remain a loose confederation of thirteen “free and independent states.”1 “Cato I,” the first Anti-Federalist essay, sounded an alarm that sustained throughout the ratification contest: “the influence of a powerful few” and “the exercise of a standing army” are threats to individual liberty.2 Another critic argued that the Constitution would simply replace the British monarchy, so recently thrown off, with a new American one and declared that he would “rather be a free citizen of the small republic of Massachusetts, than an oppressed subject of the great American empire.”3

But Hamilton knew that a “nation without a national government is . . . an awful spectacle.”4 The already tense interstate relationships would likely transition into anarchy and open warfare. The Constitution could provide “the security of liberty” that the nation desperately needed.5 Hamilton conceived a massive project, a point-by-point logical vindication of the Constitution’s principles and purposes. He not only initiated the project, he also penned fifty-one of the essays, with James Madison writing twenty-nine and John Jay the remaining five. Under the pseudonym Publius, and at a fever pitch, these three men wrote what would come to be called The Federalist Papers. The essays originally were published serially in New York newspapers from October 1787 to August 1788.

In the opening paragraph of “Federalist No. 1,” Hamilton drew attention to America’s unprecedented opportunity:

It . . . seems to have been reserved to the people of this country, by their conduct and example, to decide the important question, whether societies of men are really capable or not of establishing good government from reflection and choice, or whether they are forever destined to depend for their political constitutions on accident or force.6

He highlighted the fact that, for the first time in history, a nation had the chance to erect a legitimate government on the basis of reason and consent—as opposed to the bloody conquests that had been characteristic of every nation since antiquity.

Hamilton warned the public that “a dangerous ambition” moved some opponents of the U.S. Constitution, who operated in populist fashion “behind the specious mask of zeal for the rights of the people.”7 He suggested that Americans be on guard against those who claim to speak on behalf of the people: “History will teach us that . . . of those men who have overturned the liberties of republics, the greatest number have begun their career by paying an obsequious court to the people, commencing demagogues and ending tyrants.”8 He understood that a republic needed defense against both tyrants and mob rule. Madison referred to the latter as “pure democracy” and warned that “such democracies have ever been spectacles of turbulence and contention; have ever been found incompatible with personal security or the rights of property; and have in general been as short in their lives as they have been violent in their deaths.”9 Publius showed that only a stable republic, as outlined in the Constitution—a government designed to resist inclinations toward tyranny or pure democracy—could protect individual rights consonant with the aims of the American Revolution.

One of the gravest problems the Constitution could solve was the division of power between federal and state governments. Under the Articles of Confederation, states could enforce whatever laws they chose over their citizens, ignoring the “recommendations” of the national Congress. In “Federalist No. 15,” Hamilton identified the fundamental structural problem: “imperium in imperio,” or “sovereign within a sovereign.”10 Such divided sovereignty leads to the inability to resolve disputes or enforce a resolution in cases of disagreement between states or between state and national levels of government. Hamilton’s solution to this “great and radical vice” was to create a national executive and judiciary with the necessary powers to secure the rights of all citizens: to “extend the authority of the Union to the persons of the citizens—the only proper objects of government.”11 Madison went on to elaborate this unique structural solution in “Federalist No. 47” and “Federalist No. 51” (among others). He outlined and defended the proposed creation of a tripartite national government (executive, legislative, and judiciary) with a separation of powers, a system of checks and balances, and definitive delegation of powers between the national and state levels of government.

In closing the Federalist essays, Hamilton pointed out that the great gains proposed by the Constitution included a means of rectifying unforeseen flaws. In “Federalist No. 85,” Hamilton discussed the amendment procedure, which helped to sway many Anti-Federalists who wanted—and soon got—a bill of rights.

How did leading American thinkers respond to the Federalist essays at the time of their publication? In a 1788 letter to James Madison, Thomas Jefferson called them “the best commentary on the principles of government which ever was written.”12 And in a 1788 letter to John Armstrong, George Washington wrote that those who stepped up to defend the proposed U.S. Constitution, “particularly the pieces under the signature of Publius,” “have thrown new lights upon the science of Government, they have given the rights of man a full and fair discussion, and have explained them in so clear and forcible a manner as cannot fail to make a lasting impression.”13

Apparently, most of their countrymen agreed. The Federalist essays were reprinted and widely circulated. In the summer of 1788, Virginia and New York were engaged in heated ratifying conventions. It would have been difficult for a newly unified country to last without large, powerful states such as Virginia and New York signing on to the experiment. Madison (a member of the Publius trio) and the future chief justice, John Marshall, invoked arguments from the Federalist essays and successfully defended the Constitution in Virginia’s ratifying convention.14 Virginia and New York became the tenth and eleventh states, respectively, to ratify the Constitution.

As Washington predicted in his 1788 letter, the impression of the Federalist essays has been a lasting one. By 2006, The Federalist Papers had been quoted or cited in 324 U.S. Supreme Court cases, with a tremendous spike in citation occurring post-1984.15 Several of these were landmark decisions. Whether the case involved judicial review (e.g., Marbury v. Madison, 1803), implied powers (e.g., McCulloch v. Maryland, 1819), or the commerce clause (e.g., Gibbons v. Ogden, 1824; United States v. Lopez, 1995), each of them relied on The Federalist Papers for assistance in interpreting the Constitution’s application to the case at hand. In McCulloch v. Maryland, Marshall encapsulated the high regard many justices have for these remarkable essays:

[Th]e opinions expressed by the authors of that work have been justly supposed to be entitled to great respect in expounding the Constitution. No tribute can be paid to them which exceeds their merit.16

Declaring independence and winning the Revolutionary War were necessary but not sufficient to launch the American experiment. The Constitution provided the missing piece of the puzzle. While lovers of liberty celebrate the Constitution and the Bill of Rights, we should also take time to honor their vindication—The Federalist Papers—which helped Americans to understand the important role of a constitution in securing liberty.

Robert Begley is the Founder and President of the New York Heroes Society. He was the host and producer of the Manhattan cable TV program The Voice of Reason. His own writings and speeches can be found on his website, Robert.Begley.com.

View all articles by Robert Begley →

Carrie-Ann Biondi is an associate professor of philosophy at Marymount Manhattan College, where she is also the Chair of the Department of Philosophy and Religious Studies.

View all articles by Carrie-Ann Biondi →
Several TOS Articles Now Available in PortugueseLetter to the Editor on “Libertarianism vs. Radical Capitalism”