A Saturnalia of Bunk: Selections from The Free Lance 1911–1915 by H. L. Mencken - [TEST] The Objective Standard 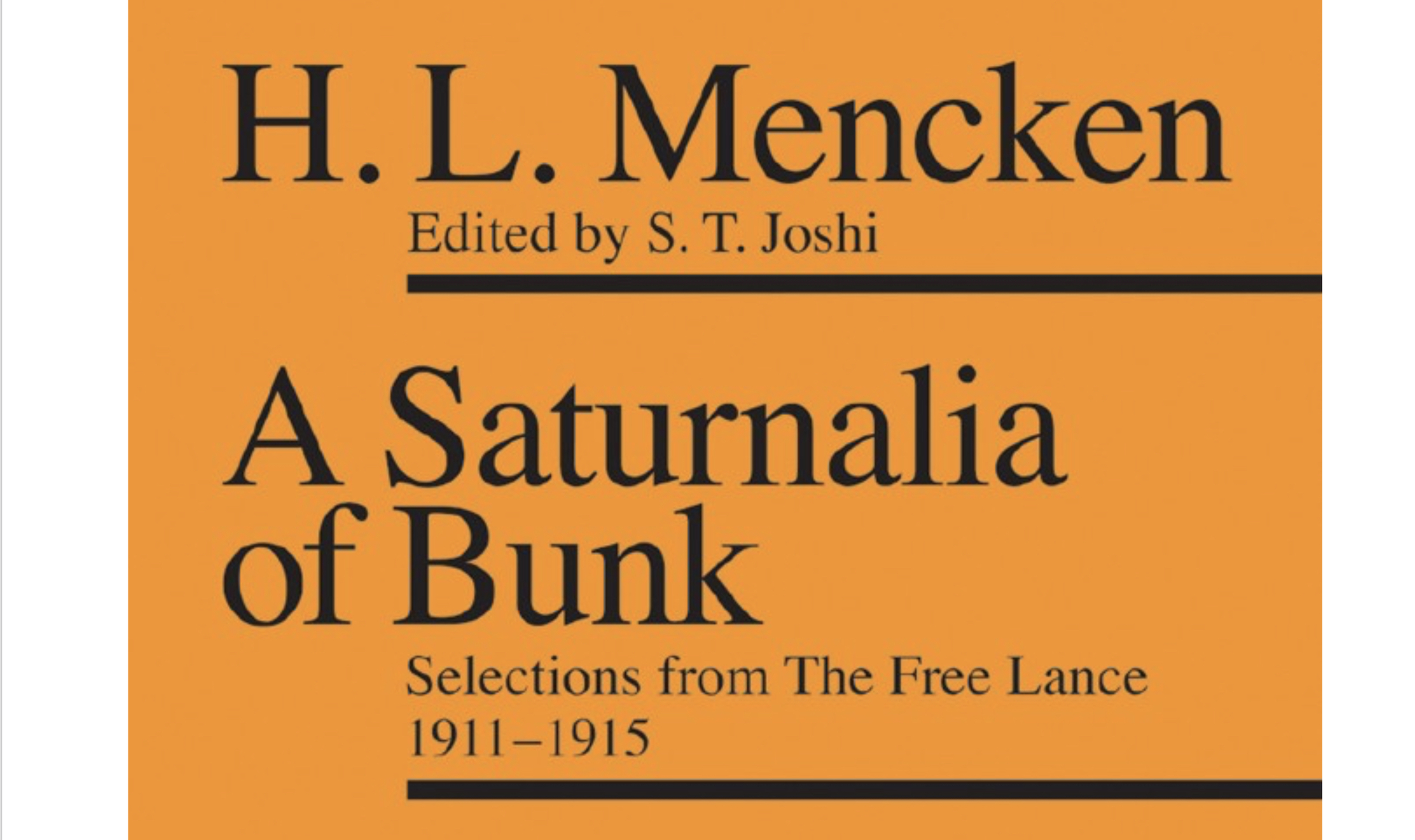 H. L. Mencken was one of the most famous and stupendous American writers of the early 20th century. He is perhaps best known for his coverage of the Scopes trial, which he dubbed the “monkey trial,” and for his obituary of William Jennings Bryan, the original of which was so excoriating that his editors insisted he rewrite it. Over his forty-year career as a journalist, essayist, and critic, he estimated that he wrote ten- to fifteen-million words (vii). He was the inspiration for the character E. K. Hornbeck in the play and film Inherit the Wind, and his pro-reason, pro-liberty views influenced innumerable writers, including Ayn Rand. (He wrote encouraging letters to Rand and recommended her first novel, We the Living, to publishers, including Dutton.)

In A Saturnalia of Bunk, Mencken scholar S. T. Joshi presents a delightful collection of early Mencken articles from his column “The Free Lance,” originally printed in the Baltimore Evening Sun between 1911 and 1915. It is fascinating reading, both an enjoyable introduction to a newcomer and a gem to those familiar with the “Sage of Baltimore.”

In 1911, Baltimore Evening Sun editor Charles H. Grasty hired Mencken despite having had rocky relations with him at a previous paper. As Joshi notes in his introduction, Grasty considered Mencken too valuable to lose. Before long, Mencken had his own column, for which he submitted twelve hundred words per day, six days per week. He reportedly intended the column to be parochial and topical, focusing on current events in Baltimore, but he achieved much more. These essays illuminate issues that are still important today.

Over the four years that “The Free Lance” was in print, Mencken skewered statists, including prohibition activists and Sunday “blue law” supporters. He promoted women’s suffrage. He argued cogently against religious figures who entangled themselves in politics. He lambasted Christian Scientists, astrologers, anti-vaccinators, and anti-vivisectionists (those against using animals in medical research). Mencken was intransigent in his belief that immoral acts should not necessarily be illegal. “To argue against it is one thing,” he wrote of prostitution. “To try to dispose of it by bluff and bullying is another thing” (174). He witnessed and criticized a police raid on a saloon. He argued against the seventeenth amendment to the Constitution, which established direct election of United States senators. He ridiculed socialism and developed a national reputation as a firebrand for freedom.

Along the way, Mencken focused his potent criticism on such national figures as Attorney General Charles Bonaparte and U.S. Postal Inspector Anthony Comstock, both notorious government censors who thought it their jobs to stamp out whatever they considered to be a vice. An undistinguished imitator of Comstock, J. Franklin Chase, even arrested Mencken in Boston for selling an issue of his magazine, The American Mercury, which allegedly was obscene. With such men in mind, Mencken wrote, “The people of Baltimore, unless I err greatly, are getting very weary of the uproar raised by vice crusaders” (174). He asked,

What right have old maids, male and female . . . to complain? Why should these entirely harmless and well-meaning persons submit themselves to the dictation of a bunch of absurd fanatics, egged on by fifth-rate politicians? . . . Why should they pay any attention to insane and oppressive laws, advocated by nickel-plated saints and passed by cowardly and crooked Legislatures? Is this the United States, or is it Russia? (159)

Mencken’s legendary prose style was well established by the time he began writing “The Free Lance.” These columns are literary and humorous, if not as uproarious as much of his later work. They are also, as he might put it, sesquipedalian—that is, bristling with an advanced vocabulary. The following for instance:

The Rev. Dr. Carlton D. Harris, editor of the Baltimore Southern Methodist, continues to xanthiate his estimable gazette with vague and sophistical attacks upon my theological talents, in particular upon my theory that prohibition is not a Christian doctrine, but a Mohammedan one, and that the Hon William H. Anderson, in consequence, is one of the noblest old Moslems that ever garroted a Giaour. (114)

The “Sage” wrote one particularly memorable piece as a “letter from Satan,” in the first person. “Satan” argues in favor of laws prohibiting Sunday drinking, Sunday baseball, Sunday concerts, and so forth.

Although Mencken could use strong, strident words to describe his nemeses, he always was thoughtful and thought provoking. He was an exemplar of logic and an indefatigable advocate for the pursuit of truth, and he held such pursuit to be “inherently pleasant” (8). Contrasting his politics with that of an influential Baltimore doctor, he wrote:

Consider, for example, the commonplace ideal, visioned by practically all of us, of a carefree and happy human race. I should like to see it realized, and Dr. Kelly would like to see it realized. But observe how vastly we differ in our plans for its realization. My plan is to let people do whatever they please, so long as they do not invade the right and freedom of other persons to do the same: that is, I see liberty of desire, of taste, of action as the capital essential to happiness. But Dr. Kelly, with the very same end in view, advocates a diametrically contrary route to its attainment. That is to say, he proposes to make people happy by force, by terrorism, by compulsion. His plan, in brief, is to decide what sort of life is a happy one, and then compel them to live it. (31)

Still, Mencken was not fully consistent with regard to the ideas he espoused. He was skeptical not only of supernaturalism but of the possibility of being certain about anything. He rightly disdained mobs but also lacked confidence in the thinking of the majority of American people. For instance, he commented, “A politician may safely laugh at reason, but he must be aware of sentiment. The common people, whom he represents and visualizes, do all their thinking emotionally. A sob impresses them vastly, but they distrust and detest a syllogism” (41). Mencken occasionally used what today might be considered racist language but generally was considered acceptable at the time. For instance, he sometimes referred to black people as “darkies.” Nonetheless, Mencken extolled a colorblind philosophy of individualism, arguing that “the validity and value of a human being’s ideas are not determined by pigmentation, nor even by sex” (56). On the other hand, he proposed a tax on bachelors. And so on.

“A politician may safely laugh at reason, but he must be aware of sentiment.” —H. L. Mencken
Click To Tweet

Mencken was also an unrepentant German chauvinist, and his arguments in support of the German Kaiser and of American neutrality in World War I were strained, unconvincing, even ridiculous. For instance, he wrote,

Surely the American people are not going to be seduced into a costly and unjust war upon a friendly people [Germany] bound to us by ties of blood, long amity and common interest, by such oblique maneuvers of a country [Great Britain] which despises us, and has twice tried to destroy us, and played dirty tricks upon us during our days of civil war. (222)

There undoubtedly are good arguments why the United States should not have entered WWI. Mencken’s are not among them.

Although readers will find flaws in A Saturnalia of Bunk, they also will find lots of rich and convincing argumentation.

Joshi has skillfully selected and edited some of the best of Mencken’s long-forgotten columns, most of which never have been reprinted. The columns are organized by theme, and Joshi’s annotation is sparse and appropriate, avoiding too much interruption of Mencken’s eloquent prose. His Glossary of Names appendix is preferable to the surfeit of endnotes that would otherwise be necessary. It informs the reader of the historical cast of characters whom Mencken names, many of them now obscure.

Pro-reason, pro-liberty readers likely will find A Saturnalia of Bunk enlightening and entertaining.

“I see liberty of desire, of taste, of action as the capital essential to happiness.” —H. L. Mencken
Click To Tweet

Jeffrey Falk is a media/entertainment professional and writer in southern California.

View all articles by Jeffrey Falk →
Liberty: What Is It? Why Is It Good? On What Does It Depend?Celebrating Slack Key and the Sweetness of Life
Return to Top