Washington Crossing the Delaware: A Beacon of the American Spirit - [TEST] The Objective Standard 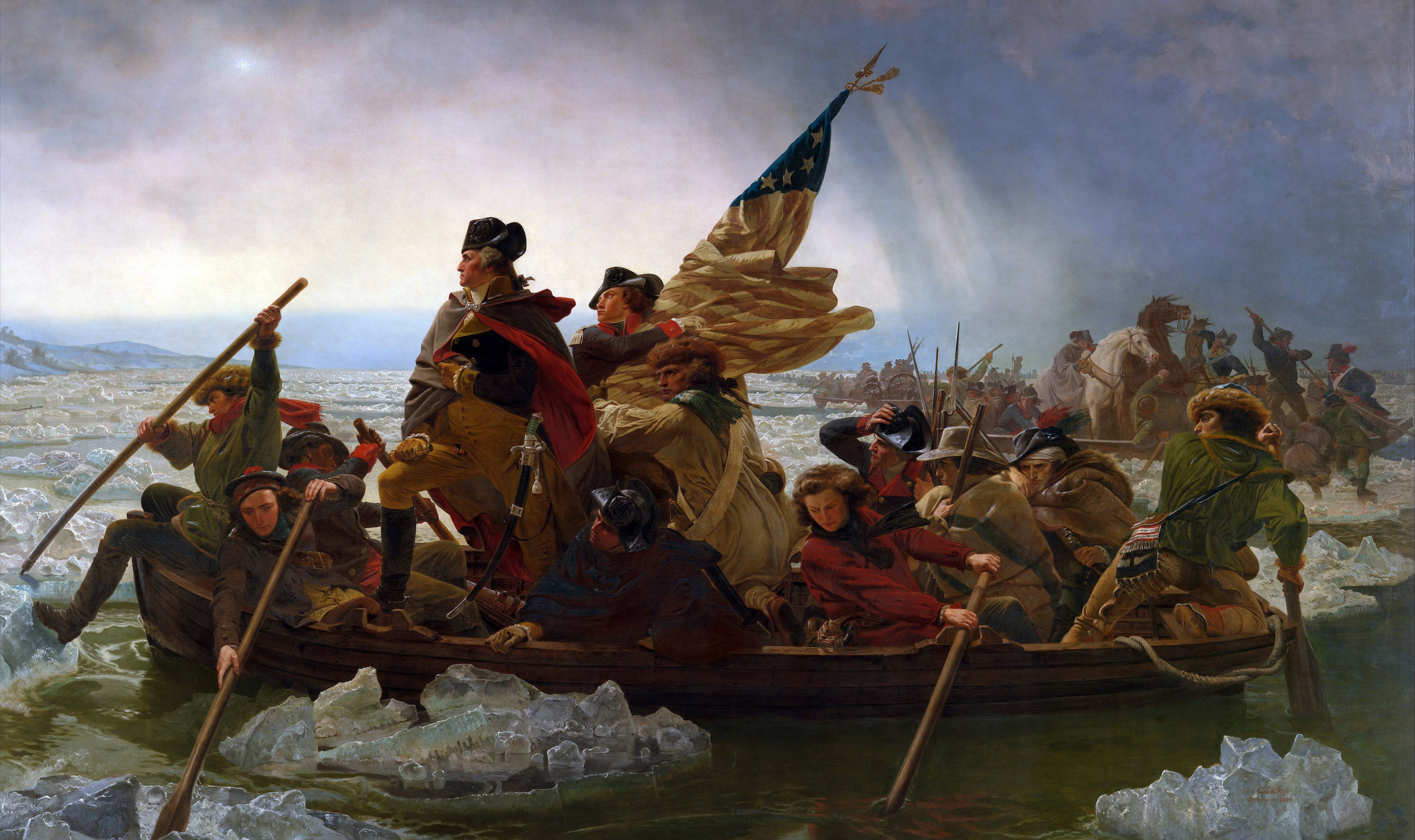 Washington Crossing the Delaware: A Beacon of the American Spirit

Unveiled in America at the Stuyvesant Institute in Manhattan in 1851, Emanuel Leutze’s Washington Crossing the Delaware attracted a level of interest and praise as noteworthy as the painting’s twelve foot by twenty-four foot dimensions.

Within four months of the exhibit’s opening, more than fifty thousand people viewed the panoramic painting of General George Washington leading his Continental Army across the icy Delaware River on Christmas night 1776. Reflecting the general sentiments of art critics, the press, and his fellow exhibit-goers, Vermont businessman Morillo Noyes wrote: “It is certainly a meritorious & magnificent work of art, and forcibly illustrates the skill, beauty & grandeur of man’s efforts when perseveringly directed for a worthy & noble end.”1

Today, Leutze’s masterpiece hangs in the Metropolitan Museum of Art in New York City, and it’s estimated that, throughout its nearly 170-year life, hundreds of thousands of people have viewed this icon of American history.

Born in Schwäbisch-Gmünd, Germany in 1816, Leutze was raised in Philadelphia, where the Declaration of Independence—which championed the politically unprecedented and morally radical idea that each individual has a “right to life, liberty and the pursuit of happiness”—was adopted.

Leutze returned to Germany in 1841, and the following year, he studied art in Munich, after which he sojourned in the Alps. Among the peaks, he reflected on “the romantic ruins of what were once free cities . . . in which a few hardy, persevering burghers bade defiance to their noble oppressors.” The experience led him “to think how glorious had been the course of freedom from those small isolated manifestations of the love of liberty to where it has unfolded all its splendor in the institutions of our own country.” This, he thought, would shape his mission as a painter:

This course represented itself in pictures to my mind, forming a long cycle, from the first dawning of free institutions in the middle ages, to the reformation and revolution in England, the causes of emigration, including the discovery and settlement of America, the early protestation against tyranny, to the Revolution and Declaration of Independence.2

While perfecting his technique, Leutze focused primarily on historical themes and figures, including Christopher Columbus, Oliver Cromwell, Hernán Cortés, and the English Puritans who escaped persecution by fleeing to America. Later, he turned his focus to the American Revolution.

Leutze also became more politically active and supported the revolutions sweeping Europe in 1848, from Italy to France to his homeland, where he called for a united, democratic Germany. These revolutionaries aimed, in part, to overthrow their monarchies to establish representative governments and certain American-inspired liberties, including freedom of the press. Amid these political upheavals, the artist thought to draw on the American Revolution’s exemplary spirit to inspire support for European rebels. “The thread connecting his subjects,” writes Carrie Rebora Barrett, a director at the Metropolitan, “was revolutionary change, from what he saw as despotic rule in the old world to the land of the free that he experienced growing up in the United States and knew through the news as an adult.”3

To evoke the American spirit, Leutze chose as the central subject of his greatest work not Washington as president of the new nation, but, rather, the heroic general who led the revolutionaries to victory over the British crown. Leutze also opted to highlight Washington’s pivotal and most celebrated triumph at the Battle of Trenton, before which the dispirited Continentals had scored no major victories.

In 1850, a fire at Leutze’s Düsseldorf studio damaged his near-finished first canvas of Washington Crossing the Delaware. He restored the charred, broken composition well enough for an insurance company to acquire and display it in Cologne, Düsseldorf, and Berlin before a Bremen museum purchased it in 1863. There it lived until being destroyed during WWII.

But Leutze was unflagging, drawing inspiration from the perseverance of his subject. Shortly after the fire he wrote, “Already, I have ordered another canvas, and shall go to work upon it at once as soon as I receive it. . . . Nothing shall deter me.”4

In January 1851, Leutze embarked on his larger, slightly revised second rendition. That spring, Adolphe Goupil, a Parisian art trader, traveled to Leutze’s studio and purchased the still unfinished painting for $6,000 (the equivalent of roughly $197,000 today). After it was completed in July, the picture was exhibited in Düsseldorf, then shipped to New York for its American debut.

Leutze portrayed Washington standing with upright confidence near the boat’s bow, one leg lunged forward and a telescope in hand as he gazes intently into a cold, stiff wind at the approaching shore. Mirroring his determination, his soldiers energetically dig their oars into the ice-jammed river as a star begins to pierce the foreboding sky, offering a sign of hope.5 Leutze’s masterpiece represents not merely the heroism of Washington and his army, but also the revolution’s broader fight for individual liberty. Its monumental scale makes clear the importance of this noble end. “This is a picture,” reads a description from that first New York exhibit, “by the sight of which, in this weary and exhausted time, one can recover health and strength. . . . [It] has power to work upon the hearts, and inflame the spirits of all that behold it.”6

Among the exhibit-goers was Marshall O. Roberts, a transportation entrepreneur and art collector, who paid Goupil $10,000 (the equivalent of roughly $333,000 today) for the painting. Roberts agreed to have the picture continue its tour in early 1852 at the Rotunda of the U.S. Capitol in Washington, D.C., where congressmen reportedly called for the original or a replica to be exhibited at the White House.

Receiving the painting after this exhibit at the Capitol, Roberts permitted his pricey gem to leave his Fifth Avenue townhouse just once, during the Civil War in 1864, for display alongside other artwork and photographs intended to stoke patriotism and national pride at a fund-raiser to assist injured Union soldiers.

Seventeen years after Roberts died in 1880, his family put his art collection up for auction, and Washington Crossing the Delaware sold for $16,000 (the equivalent of roughly $402,000 today) to financier John S. Kennedy, who donated it to the Metropolitan, where it would be displayed in the museum’s American Wing.

Through the years, the painting’s detractors have criticized it for portraying several inaccuracies, historical and otherwise. But, to address two examples, even if the river’s chunks of ice are impossibly large and Washington couldn’t have stood in the small boat on rough waters as depicted, these imprecisions in a work of art are irrelevant. Unlike a historian or journalist whose job is to impart facts, an artist’s job is to convey abstract values by means of perceptual concretes, and an artist does so by selecting elements and emphasizing characteristics that serve this purpose. Leutze almost certainly chose to enlarge the ice and have Washington stand tall in stormy conditions to emphasize the determination and resilience of a leader and his troops in their quest for freedom—all keys to the painting’s theme.

Listing the inaccuracies . . . misses the whole intention of the artist and the meaning of the picture, particularly in view of Leutze’s insistence that a picture should revolve about one central idea rather than concern itself with minutia. Leutze had no desire to paint a thorough reconstruction of the scene—he was trying to capture the spirit of a great leader and the importance of a great event.7

Today, Washington Crossing the Delaware hangs solo on a wall in a spacious, skylit room designed specifically for the masterpiece after its thorough restoration, complete with a replica of Leutze’s original gold-leaf embellished frame—all part of the Metropolitan’s latest renovation of the American Wing.

Whether you’re a New Yorker or visiting the big city, stop by the gallery to see firsthand this beacon of freedom and embodiment of the American spirit.

“This is a picture, by the sight of which, in this weary and exhausted time, one can recover health and strength.”
Click To Tweet

Joseph Kellard is a writer and photographer. View his portfolio and get in touch by visiting www.kellardmedia.com.

View all articles by Joseph Kellard →
Announcing Winners of TOS-Con’s “Think, Strive, Thrive” and “Liberty & Prosperity” ScholarshipsTOS-Con Is Filling Up Fast—Join the Fun!

5. Howat writes: “The artist Worthington Whittredge, who along with Eastman Johnson worked in Leutze’s studio, gave an eyewitness account of the preparation of the picture in his autobiography. . . . ‘A large portion of the great canvas is occupied by the sky. Leutze mixed the colors for it overnight and invited Andreas Achenbach [the leading landscape painter of the Dusseldorf school] and myself to help him cover the canvas the next day, it being necessary to blend the colors easily, to cover it all over in one day. It was done; Achenbach thought of the star, and painted it, a lone almost invisible star, the last to fade in the morning light.’” See Howat, Washington Crossing the Delaware, 292.