On August 26, 1852, forty-one-year-old Charles Sumner rose to give his first speech on the floor of the U.S. Senate. He proposed to repeal the Fugitive Slave Act. Friends warned that attacking slavery so directly would be politically and personally dangerous, but Sumner insisted. He could not stay silent, he said, because he believed “that, according to the true spirit of our Constitution and the sentiments of the fathers, it can find no place under our National Government.”1

It was the prologue to a senatorial career that would last more than two decades and make him—as chairman of the Senate Foreign Relations Committee—arguably the country’s most powerful politician. Many came to resent Sumner’s ideological purity. But his uncompromising integrity made Sumner an indispensable player in the drama that climaxed with the abolition of slavery.

Born in Boston and educated at Harvard, Sumner entered politics at just the time when the showdown over the “peculiar institution” entered its most virulent phase. In the 1830s, southern leaders such as South Carolina’s John C. Calhoun began denouncing the principles of the Declaration of Independence and insisting that slavery was not an evil to be eliminated, as its authors had thought, but a “positive good” that the Constitution protected.

Antislavery forces, especially in Massachusetts, were horrified. Their reactions took two forms. Agreeing with Calhoun that the Constitution guaranteed slavery, anarchist William Lloyd Garrison insisted that the only moral course was to abolish the government. The Constitution was evil, he said, and the nation should be dissolved. Other antislavery thinkers, however, argued that the Constitution had been written with the understanding that slavery could and would be abolished; that it included temporary compromises but gave that system no permanent protections.

Foremost among these pro-Constitution, antislavery intellectuals was former President John Quincy Adams, who served in the House of Representatives between 1831 and his death in 1848. The nation’s most important antislavery politician, Adams represented African slaves in the Supreme Court, opposed efforts to seize Texas for the expansion of slavery, and led opposition to the “Gag Rule” that forbade even the discussion of antislavery proposals in Congress. On one occasion, he even sought to introduce a petition that seemed to be signed by slaves. (It was probably a fake.) When a Southern representative reacted by asking scornfully if Adams would introduce a petition from a dog or a horse, Adams shot back, “If a horse or a dog had the power of speech and of writing, and he should send him a petition, he would present it to the House; ay, if it were a famished horse or dog, he would present it.”2 Later, when another Congressman accused Adams of encouraging bloodshed to abolish slavery, Adams shouted, “Though it cost the blood of MILLIONS OF WHITE MEN, LET IT COME. Let justice be done though the heavens fall.”3

Adams—who collapsed and died in the House while speaking against slavery—mentored a generation of abolitionists, including Sumner, who became the nation’s ringing conscience in the decade before the Civil War. In 1856, after he spent two days excoriating efforts to introduce slavery into Kansas, Sumner was beaten nearly to death by a southern Congressman. His injuries kept him out of the Senate for almost three years. He returned to lead the Congressional faction insisting on total defeat of the Confederacy, and after the war, became the foremost advocate of federal protections for former slaves. His last words were a plea for adoption of the 1875 Civil Rights Act. All of these things, he insisted, were required by the principles of the Constitution. 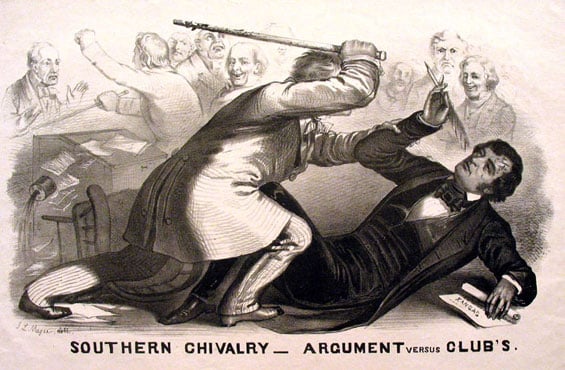 Sumner and his allies were guided by the belief that America was not premised on racism, as both Garrison and Calhoun claimed—and many today still claim. He insisted, on the contrary, that the end of bondage and segregation was mandated by the truths articulated in the Declaration of Independence, which, echoing Adams, he called “the controlling preamble of the Constitution.” “By reason and Nature,” he told his colleagues when eulogizing Lincoln, “there can be no denial of rights on account of color; and we can do nothing thus irrational.” The principles of the Republic required “the equality of all before the law, and the consent of the governed. Such is the true idea of republican government according to American institutions.”4

At a time when Americans are once again debating the history of slavery, we must never forget the legacy of Charles Sumner.

Charles Sumner insisted that the principles of the Declaration required the abolition of slavery.
Click To Tweet

View all articles by Timothy Sandefur →
From the Editor, Fall 2019One Girl One Dream by Laura Dekker