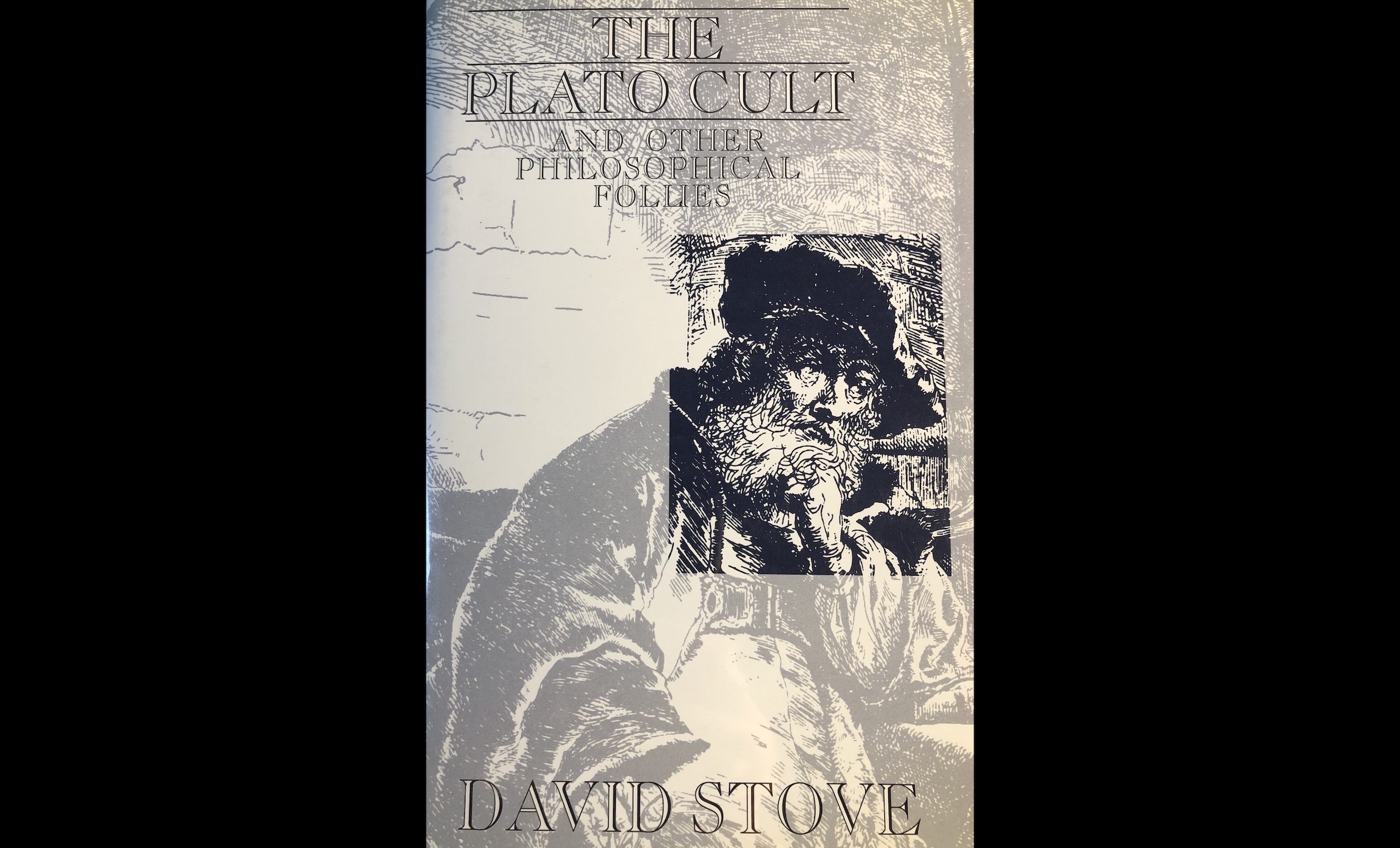 The Plato Cult and Other Philosophical Follies by David Stove

In 1985, Australian philosopher David Stove held a contest to identify “the worst argument in the world”—the one that was the most terrible, widely accepted, and sheltered from criticism. He declared himself the winner for the following:

We can know things only:

So, we cannot know things as they are in themselves.1

Prussian philosopher Immanuel Kant used this argument when denying that humans are capable of genuine knowledge, and variants have been (and are being) deployed by relativists of all stripes. “The cultural-relativist, for example,” writes Stove, “inveighs bitterly against our science-based, Europe-centered, white-male cultural perspective. . . . for no reason in the world except this one: that it is ours” (167). Likewise, “The Marxist insists that all our knowledge . . . is inescapably limited and distorted by our own economic-class situation” because our knowledge is possible only under our specific economic conditions (167–68).

In The Plato Cult and Other Philosophical Follies, Stove offers penetrating analyses of these and similarly bad arguments, and his barbed wit turns reading about philosophy into sidesplitting fun. The book (which takes its name from a Byzantine religion that deified Plato) consists of seven essays that target, among other things, religious belief, the scientific irrationalism inaugurated by Karl Popper, Robert Nozick’s view of “philosophical explanation,” George Berkeley’s idealism, and the arguments and cultural circumstances that have enabled such foolishness to flourish.

Exemplifying this last, Stove calls the period beginning after World War I—when “the world turned upside down”—the Jazz Age, explaining, “it is the idea of reversal, rather than that of random change, which is the key to the Jazz Age. It is also the key to Popper’s philosophy of science” (3). Scientists since Francis Bacon made tremendous advances using an inductive method, reasoning from the observed to the unobserved. In the spirit of the Jazz Age, Popper argued that we cannot infer from the observed to the unobserved and that irrefutability is a weakness, not a strength, of any scientific theory.

Stove uncovers how several modern philosophers further “developed” Popper’s views on the worthlessness of induction. There was, for instance, Paul Feyerabend, a self-proclaimed Dadaist (one who holds that the modern world is pointless and worthy only of ridicule) who mocked the very idea of knowledge, advancing “epistemological anarchism” in his 1975 book, Against Method. Similarly, Thomas Kuhn “will not talk himself, or let you talk if he can help it, of truth in science, or . . . of falsity,” writes Stove. “[H]e claims he cannot understand this class of talk (You have to be very learned indeed to find things as hard to understand as Kuhn does)” (10).

Particularly keen is Stove’s observation that these philosophers succeeded in disguising their irrationalism largely by neutralizing success-words. “‘Find,’” he explains, “is a success-word: you cannot find something unsuccessfully, and can find only what exists. Again, ‘prove’ is a success-word, while ‘believe,’ for example, is not: you can prove only what is true, but you can believe what is not true” (12–13). As modern irrationalists couldn’t avoid using success-words entirely, they often put them in scare quotes and, in general, used them to convey “not F but believed (by so-and-so) to be F” (17).

Those familiar with philosopher and novelist Ayn Rand’s identification of the fallacy of the stolen concept will notice a family resemblance between it and what Stove, in another essay, calls the “Ishmael effect.” This occurs whenever someone’s claim includes or relies on facts that contradict it, as when someone yells, “I can’t speak above a soft whisper.” Stove holds that advocates of idealism, the theory that everything that exists is constituted of mental or spiritual “stuff,” contradict themselves in similar fashion: “No human being could ask, even inwardly, whether an external world exists, unless at least one human being exists. And necessarily, if at least one human being exists then an external world exists” (71).

With the wit of a Mark Twain and the jaundiced eye of a Richard Mitchell, Stove continues the expedition against idealism throughout much of the book. The theory, he argues, is an attempt to retain belief in a beneficent, or at least kindred, universe without the embarrassing absurdities of religion. Because idealism has “a wish in its sail,” its supporters scarcely have needed to offer arguments, and Stove traces the few they have offered back to one monumentally important but unbelievably weak argument offered by George Berkeley: You cannot think of trees outside the mind without having them in mind, so trees exist only in the mind. This argument “has done so much damage to sanity,” writes Stove, “that, if syphilis had been introduced into Europe deliberately by one man, that man would have done less harm than Berkeley, who deliberately and almost single-handed introduced idealism into modern philosophy” (109).

Because it unabashedly denied the existence of the external world, Berkeley’s brand of idealism never did gain much traction. Nonetheless,

for professional philosophers the great desideratum, after Berkeley, was simply this: a version of idealism which was not, like his, a proper object of derision. It was precisely this which Kant appeared, at least, to supply, and the philosophical profession, almost as one man, and with inexpressible relief, closed with his offer. This was the unique service which Kant rendered to modern idealism: he seemed to prove, in his own person, that you could be an idealist without looking a complete fool. This is what entitles Kant to Nietzsche’s superb description of him, as “this catastrophic spider.” Berkeley’s web caught no one; but Kant’s web, promising idealism-without-subjectivity, proved irresistibly attractive, and for the next 150 years almost no philosopher escaped it. This “objective” idealism was not reached by argument: argument had nothing to do with it. It was reached by the biggest, though also the simplest, bluff ever tried. Kant simply said, in effect “Let us say that the physical universe is objective as well as ideal: that should satisfy all parties (or at least stagger them).” (103)

Stove strips Kant’s argument of its “owlish pomposity,” shows its essential similarity to Berkeley’s, reveals how similar aberrations of thought took hold in the English-speaking world, and shows how even after “idealism expired, somewhere around 1940, [this type of] argument not only survived it, but was poised to enter upon the most brilliant phase of its career” (165).

Stove is clear and stunningly entertaining, and he has a strange gift for spinning from an apparent tangent an on-point and lucid lesson. But, to the detriment of his arguments and his readers, he occasionally prioritizes polemic over precision. The most egregious example in this volume comes in his critique of Robert Nozick’s Philosophical Explanations. Nozick made a sloppy attempt at distinguishing philosophical explanations from arguments by arguing that arguments are coercive and that philosophers ought to explain rather than argue. Instead of questioning Nozick’s misuse of the term “coercion,” Stove goes along with it, coming to the abominable conclusion that “No ideal could be more destructive of human life than the ideal of non-coerciveness. A new-born human is so helpless, . . . that it would never survive for one day if hands which are both coercive and loving did not guide it to the nipple.” “Such biological common sense,” writes Stove, ought to have taught Nozick that “in Homo sapiens, as in any species, close bonds between individuals are never formed except where the possibility of coercion is a known and standing element of the situation” (58).

Of course, to equate caring for one’s child and the like with coercion is to render the term meaningless and to sanction violent dictators in the process. What Stove said of Berkeley’s argument mentioned above—along with his implied jest—is true of this one, too; “it is so perverse a use of our common, innocent, and priceless gift of language, that it should never have been allowed to be published” (109).

In keeping with the volume’s focus on “philosophical follies,” Stove shares his admittedly pessimistic view that a nosology (a science of disease classification) for human thought is the highest achievement open to philosophers—an outlook befitting this king of gadflies. Demolishing irrational ideas, not offering rational ones, was definitely Stove’s forte.

That said, his earlier work was essentially positive in nature. Both his Probability and Hume’s Inductive Scepticism and The Rationality of Induction aimed at solving the “problem” of induction as formulated by David Hume. However, these depended on statistics (as did Stove’s idiotic arguments on differences between sexes and races) and so were essentially futile.2 A man may have seen millions of brown squirrels and none of any other color, but this alone is not sufficient grounds to conclude that “All squirrels are brown.” Simple enumeration—without an understanding of causation—is not a valid basis for induction, statistics notwithstanding.3

Thus, Stove justly described himself as a “purely negative thinker,” and he undoubtedly was most comfortable when on the attack. He even retired early from the University of Sydney after his castigation of colleagues for supporting Marxism and feminism drew threats of “disciplinary action” from administrators. “What now remains of General Philosophy [at the University of Sydney],” he said, “is not so much a philosophy department as a place of retreat, where the devotions prescribed by feminist or Marxist piety can be performed in peace, and under the direction, of qualified priests.”4

As Ayn Rand wrote, “To laugh at the contemptible, is a virtue,” and it’s one that Stove practiced diligently.5 Perhaps he understood, as John Locke did, that “’tis ambition enough to be employed as an under-laborer in clearing ground a little, and removing some of the rubbish, that lies in the way to knowledge.”6 That, Stove did wonderfully on many issues, as demonstrated in The Plato Cult—and in so doing, he rendered a tremendous service to philosophy and clear thinking.

As #AynRand wrote, “To laugh at the contemptible, is a virtue.” With the wit of a #MarkTwain and the jaundiced eye of a #RichardMitchell, David Stove practiced this virtue diligently and thus did philosophy a tremendous service.
Click To Tweet

2. For Stove’s views on differences between the sexes, see David Stove, “The Intellectual Capacity Of Women,” Cricket Versus Republicanism (Sydney: Quakers Hill Press, 1995), https://wmbriggs.com/post/17124/; for a fair though non-exhaustive response, see Jenny Teichman, “The Intellectual Capacity of David Stove,” Philosophy, no. 76 (2001), https://philarchive.org/archive/TEITIC; for Stove’s views on the differences between races, see David Stove, “Racial and Other Antagonisms,” Cricket Versus Republicanism, https://archive.org/details/RacialAndOtherAntagonisms.