So Who Is John Galt, Anyway? by Robert Tracinski - [TEST] The Objective Standard 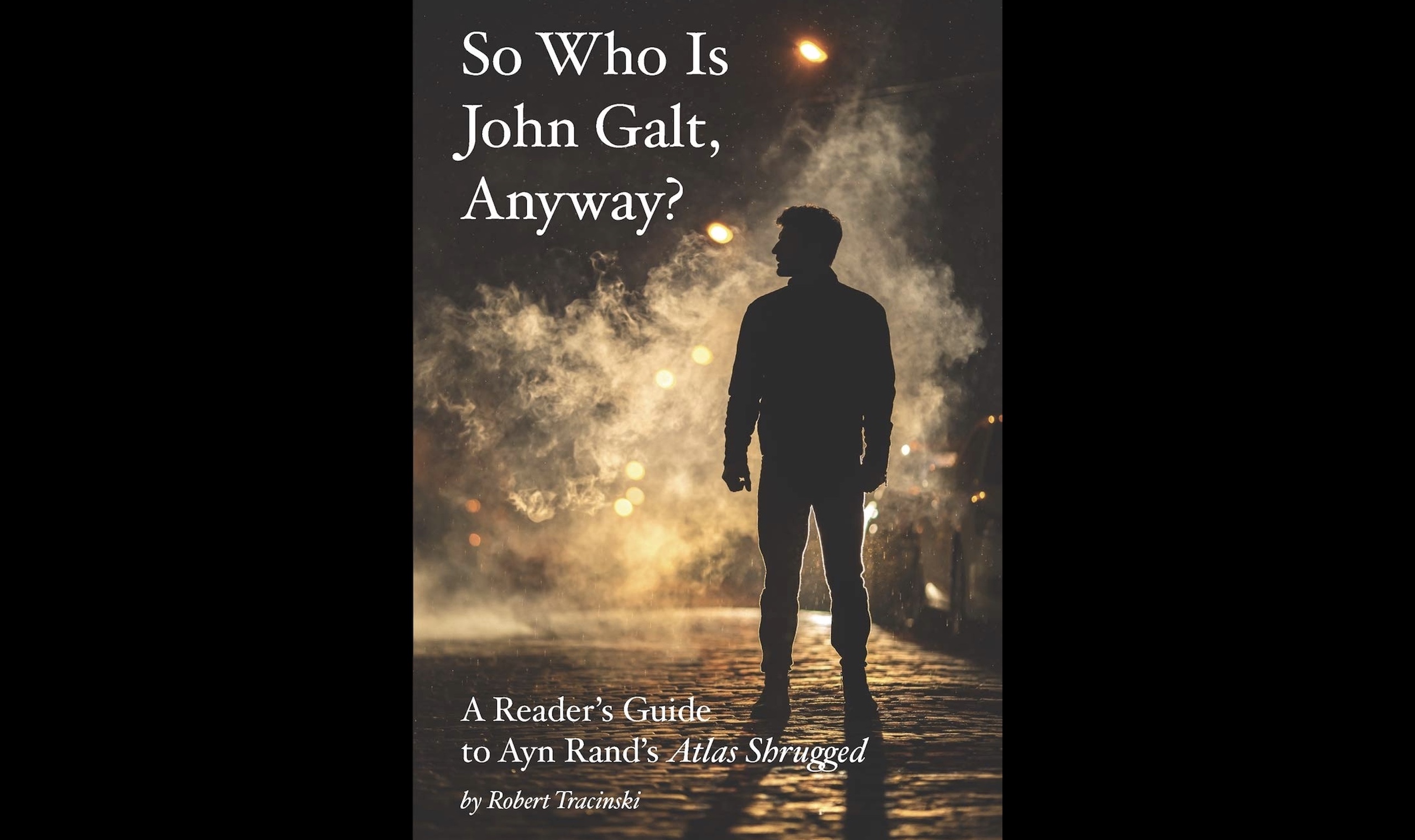 So Who Is John Galt, Anyway? by Robert Tracinski

In So Who Is John Galt, Anyway?, Robert Tracinski provides a wide-ranging examination of Ayn Rand’s magnum opus, Atlas Shrugged. For those who have read the novel and wish to dig deeper, this collection of twenty essays is an excellent companion.

In a chapter titled “Whydunit?,” Tracinski examines the role of philosophic speeches in the novel. In a conventional “whodunit,” the reader receives the same clues as the investigator and has a chance to identify the perpetrator before the big reveal at the story’s climax. Tracinski points out that the big question in Atlas Shrugged is not who done it—after all, the prime mover is revealed when one-third of the story still remains—but why he and his fellow conspirators do what they do. As Tracinski points out, by the end of part two, Dagny Taggart has solved many of the book’s mysteries: She’s found the inventor of the motor; she’s discovered that he is the “destroyer,” the man facilitating the world’s brain drain; and she has located the creators he’s siphoned from society. “Yet,” writes Tracinski, “this is not the resolution of the plot, because the real mystery isn’t the ‘who’ or the ‘what.’ It’s the why” (177).

Tracinski highlights the fact that the philosophic speeches in Atlas are crucial to answering the “why” at the core of the book: They drive the plot forward while revealing the ideas that motivate the story’s heroes and villains. For example, in the book’s longest speech, John Galt not only asks creators of all types to join his strike, but he explains the philosophic system that led him to initiate it. And by this point, readers are eager to know what argument could be so potent that it persuaded towering creators in every field to abandon their life’s work. Given those whom it’s won over, such an argument could not have relied on “vague slogans or appeals to tradition or emotion” (178). The only thing that could have convinced such heroes as Francisco D’Anconia, Ken Danagger, and Midas Mulligan to leave society and the businesses they’ve built is a thorough, rational, philosophic argument.

Some—including fans and critics alike—argue that Galt’s speech is too long, and Tracinski agrees, contending that its “length is a proven impediment to the forward movement of the plot” (182). In his evaluation, “Galt’s Speech contains a bit too much abstract philosophy, ideas that are necessary for the philosophical deep thinker, but not for the general audience to which the novel is directed” (183).

Whether or not Galt’s speech could be profitably truncated, Tracinski’s main point in this chapter is correct: Atlas is a whydunit. And near the end of the book’s long plot development, a philosophy-driven mystery, the hero must explain why the creators have gone and what are the conditions of their return. In so doing, Galt’s speech integrates the book’s plot and theme.

In another fascinating chapter, “The First of Their Return,” Tracinski shows that Rand was not merely a philosopher of the Enlightenment tradition—celebrating reason, self-interest, and individual rights—but that she corrected many of the philosophic errors and omissions of the period. She fulfilled the Enlightenment’s promise by formulating the axiom that existence exists independent of consciousness and by providing an objective basis for morality. Perhaps Tracinski’s most insightful point in this regard is that Rand fixed and completed the Enlightenment’s philosophy of reason in her capacity as a novelist by integrating reason and emotion in her characters.

As he argues, few (if any) Enlightenment-era literary works match the impassioned poetry, fiction, and drama of the subsequent Romantic period—the poetry of Byron, Keats, Shelley; the drama of Goethe, Schiller, Ibsen, Rostand; the novels of Hugo and Dostoyevsky. “It is generally conceded that the backlash to the Enlightenment, the fiery emotionalism of the Romantic era, produced a more stirring artistic vision” (242).

Many hold that reason and emotion are opposed—that reason is the calm pursuit of truth vividly dramatized by Sir Arthur Conan Doyle’s brilliant detective, Sherlock Holmes, and that emotion is the frenzied, out-of-control passion exhibited by many of Dostoyevsky’s characters, Dmitri Karamazov being one striking example. On the premise of this conventional dichotomy, it is understandable why some might think that the champions of emotion could produce greater literary art than the champions of reason, for the essence of great fiction and drama is conflict. Men of passionately held values struggle to achieve opposing purposes. They need not be thinkers to do so: Ivan Karamazov, for instance—Dostoyevsky’s example of an Enlightenment intellectual—plays a lesser role in driving the conflict of The Brothers Karamazov than do his frenzied family members.

But Rand, Tracinski shows, rejects the traditional dichotomy, instead dramatizing the integration of reason and emotion. John Galt, in passionate commitment to philosophic principles, leads a strike of thinkers to topple a burgeoning dictatorship and resuscitate liberty—goals so dear that he would sooner suffer torture and death than renounce them.

Atlas Shrugged transcends the contest between the Enlightenment and Romanticism, providing all the excitement and appeal of the latter but in service to the ideals of the former. . . . [Rand] shows how reason leads to and supports all of the appealing qualities of the Romantics—love, passion, struggle, self-assertion, a sense of heroism. . . . She could not have done it without new philosophic ideas. . . . But when it comes to promoting the best of Enlightenment ideals as a living cultural force . . . her literary style is at least as important a contribution. (245)

In another chapter, “No Evil Thoughts but One,” Tracinski answers a left-wing commentator who once asked why Atlas Shrugged has no collectivist equivalent. He points out that the left’s class-war ideology construes society in terms of oppressor and oppressed—and the latter, these “helpless victims” of a “repressive capitalist system,” as the good. But if the good is represented by hapless victims—who, by their nature, are incapable of triumph—then the left’s intellectual spokesmen will be incapable of projecting heroes or worlds in which good conquers evil. Instead, they enshrine antiheroes. As Tracinski concludes, “The left’s embrace of a collectivist ideology committed it to the anti-intellectualism of the ‘race, class, and gender’ school in politics, and to the bleak tedium of the Naturalist school in literature” (274).

Tracinski’s collection of essays provides numerous other important insights. Similar to the book about which he is writing, his ideas are bolstered by his own writing style—colloquial, nontechnical, and clear.

This book is a valuable addition to the growing corpus of work analyzing Ayn Rand’s literary accomplishments. It will expand a reader’s appreciation of the momentous story about a man who vowed to stop the motor of the world—and then did.

For those who have read #AynRand's #AtlasShrugged and wish to dig deeper, Robert Tracinski’s So Who Is John Galt, Anyway? is an excellent companion.
Click To Tweet

View all articles by Andrew Bernstein →
Statist Responses to COVID-19: An Interview with Michael FumentoThe Case against Socialism by Rand Paul
Return to Top