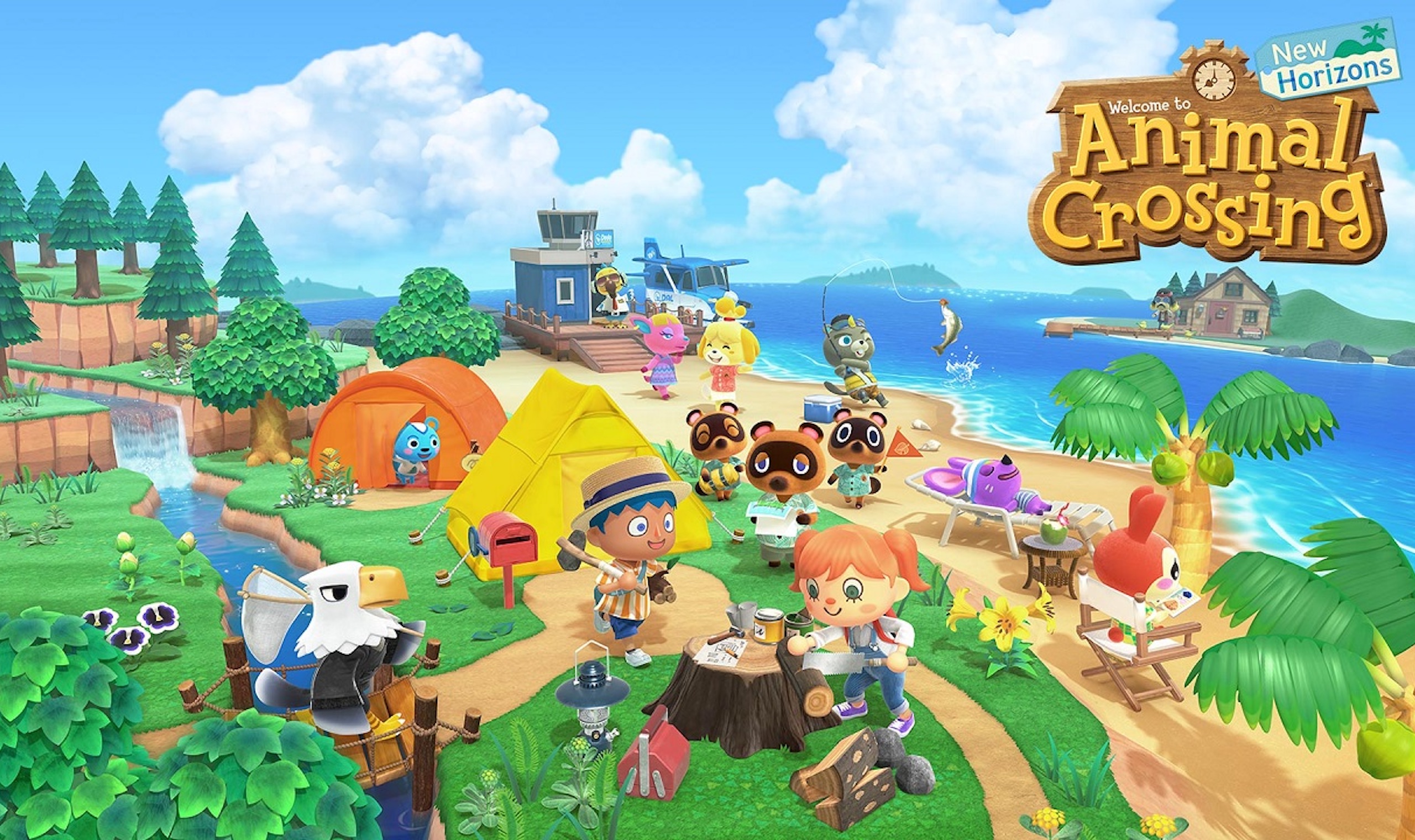 Nintendo’s long-running Animal Crossing series revolves around a human working to build a life in a village of talking animals. The latest entry, New Horizons, serves as a glowing endorsement of both the economic and social aspects of capitalism. Although the game is targeted primarily at children, it’s also hugely popular with adults and is designed to appeal to people of all ages.

At the game’s outset, you book a ticket to an uninhabited island with Nook Inc., a large corporation that operates a travel agency, among other ventures. Upon arriving on the island, you find a picturesque combination of beaches, rivers, and forests; the environment is rife with natural resources but initially is borderline hostile to human (and anthropomorphic animal) life. On your first night, you and two animal companions pitch tents on the beach, excited to begin your new lives.

Over the following few days—which pass in real time—you gather resources, build simple tools, and begin to construct permanent housing. Tom Nook, owner of Nook Inc., and his nephews Timmy and Tommy set up a “Resident Services” tent and open a rudimentary general store to facilitate your efforts. In the game’s early stages, you’re forced to inexpertly perform many different tasks yourself. But as you slowly build wealth, create infrastructure, and invest your earnings back into the economy, the island’s overall growth accelerates, and eventually you can specialize in jobs of your choosing.

The more narrowly you specialize, the easier it becomes to earn large amounts of money quickly, which you can reinvest to perpetuate the virtuous cycle. For instance, after expanding the general store, which both buys and sells products, Timmy and Tommy begin offering a promotion called “hot items.” Each day, they pay double the usual price for a particular item. I was excited to see that one “hot item” was wooden stakes because I had hundreds of extra wooden logs stored in the shed behind my house. I fashioned most of them into stakes, sold them all for 145,000 Bells (the game’s currency), paid off my mortgage, and invested the remainder.

Although the game never uses the word “capitalism” or explicitly praises the win-win nature of its incentive structures, it heavily implies and implicitly endorses a pro-free market attitude in virtually every activity and line of dialogue. Other villagers sometimes ask for favors but always offer money, items, or other favors in turn. Everyone voluntarily contributes resources and labor to major projects, but not as though the island were a commune—it’s made clear that those investing expect a return, whether in the form of Bells or simply in the ability to enjoy an increased standard of living as the economy grows. Eventually, other animals from around the world hear about your budding utopia, move in, set up shops of their own, and begin to offer luxury goods and services.

If you have a Nintendo Online subscription, you can trade with other players over the internet, visit their islands, and invite them to yours. Each island has a distinctly different economy, and trade is heavily incentivized. For instance, each island natively grows only a single type of fruit, limiting your food and trade options within your own borders. But by trading some of, say, your oranges for a friend’s cherries, you can then plant cherry trees on your island, and your local villagers will pay more for the new, comparatively exotic fruit. Your friend can do the same with his new batch of oranges.

These differences between island economies extend to the “Stalk Market” as well. Every Sunday, a roaming “Stalk broker” will visit your island and offer to sell turnips at a price that fluctuates weekly (and between different islands). You’re free to buy as many turnips as you can afford. You then have until the following Sunday to sell your turnips to Timmy and Tommy, who (usually) will pay more than you bought them for. Their buying price changes twice per day, and it’s up to you to decide whether to play it safe by selling for a modest profit or to hold out for potentially higher profits later in the day or week. Wait too long, though, and your turnips will rot, wasting your initial investment. Turnip prices vary on your friends’ islands, too, further incentivizing communication, travel, and trade. As in real life, dedicated and diligent investors can grow their wealth exponentially in relatively short order, and other villagers also grow richer as you spend and invest greater sums of money.

New Horizons also bucks typical video game trends by encouraging you to cut down trees, mine for iron, and otherwise excavate the island for resources with which to improve the lives of its citizens. Whereas many other games imply or state outright that such resource gathering is, at best, a necessary evil, there isn’t so much as a hint of environmentalist nonsense to be found in New Horizons. Interestingly—but not surprisingly—every other island I’ve visited so far has been pristinely clean, tended with obvious love and care. Many other island owners periodically replant trees to replace the ones they cut down, ensure that garbage is properly disposed of, and set aside portions of the island as nature reserves, as do I. Because the island is private property, a significant chunk of which is yours, you have many reasons to keep it clean and to renew its resources as needed (no need to worry about the tragedy of the commons).

No one on the island gives or accepts the unearned, nor do they fail to appreciate that which others have earned. If you want a bigger house, you have to take out a mortgage or pay cash up front. If you want a high-end audio system for your living room, be prepared to pay premium prices. And if other villagers ask you to do something, you always can politely refuse, and they graciously will accept your refusal. Not once has any other player or character in the game tried to guilt me into doing them a favor or—worse—tried to make me feel guilty for my oak-and-marble mansion on the hill. On the contrary, every so often, a villager will leave a gift and a nice letter in my mailbox, thanking me for all of my hard work in creating an island paradise.

New Horizons’ achievements are myriad, but its most laudable one is its ability to convey the essence of capitalism in ways that even young children can easily understand. There are no lectures on economic theory or complex graphs to analyze. You simply pursue your own rational interests, trade with others to whatever extent you care to do so, and reap rewards proportional to the effort you put in. Indeed, you never have to build or work at all; you can live forever in a cheap tent on the beach and survive on scavenged berries, although that’s as dull in the game as it is in real life.

Arguably, the social lessons that New Horizons imparts to children are even more important than the economic ones. Virtually everyone in the real world—children and teens in particular—is constantly bombarded with altruistic messages, such as the notion that, in order to be a good person, you must share your toys and possessions, even if you don’t want to. Such ideas invariably breed envy, resentment, and many other emotions and mindsets antithetical to living a good life. New Horizons consistently and explicitly shows children that healthy relationships are built on trading for mutual benefit, in both the material and spiritual spheres. It also regularly reinforces the idea that, in general, good things happen when you work hard and treat others fairly.

I’ve been playing video games since 1990, and in all of that time, I can’t recall a single other game nailing the essential principles of capitalism as accurately and elegantly as New Horizons does. Not only is it an excellent and entertaining educational game for children, it’s also a relaxing, rewarding, evening and weekend escape for adults, particularly those frustrated by how often capitalism is misunderstood or misrepresented. I’m only about forty hours into the game, but I’m looking forward to hundreds more over the coming months and years.

Animal Crossing: New Horizons serves as a glowing endorsement of both the economic and social aspects of capitalism.
Click To Tweet

View all articles by Tim White →
Black Lies Matter: Why Lies Matter to the Race Grievance Industry by Taleeb StarkesAnd Then He Shot His Cousin by Jeremiah Cobra
Return to Top