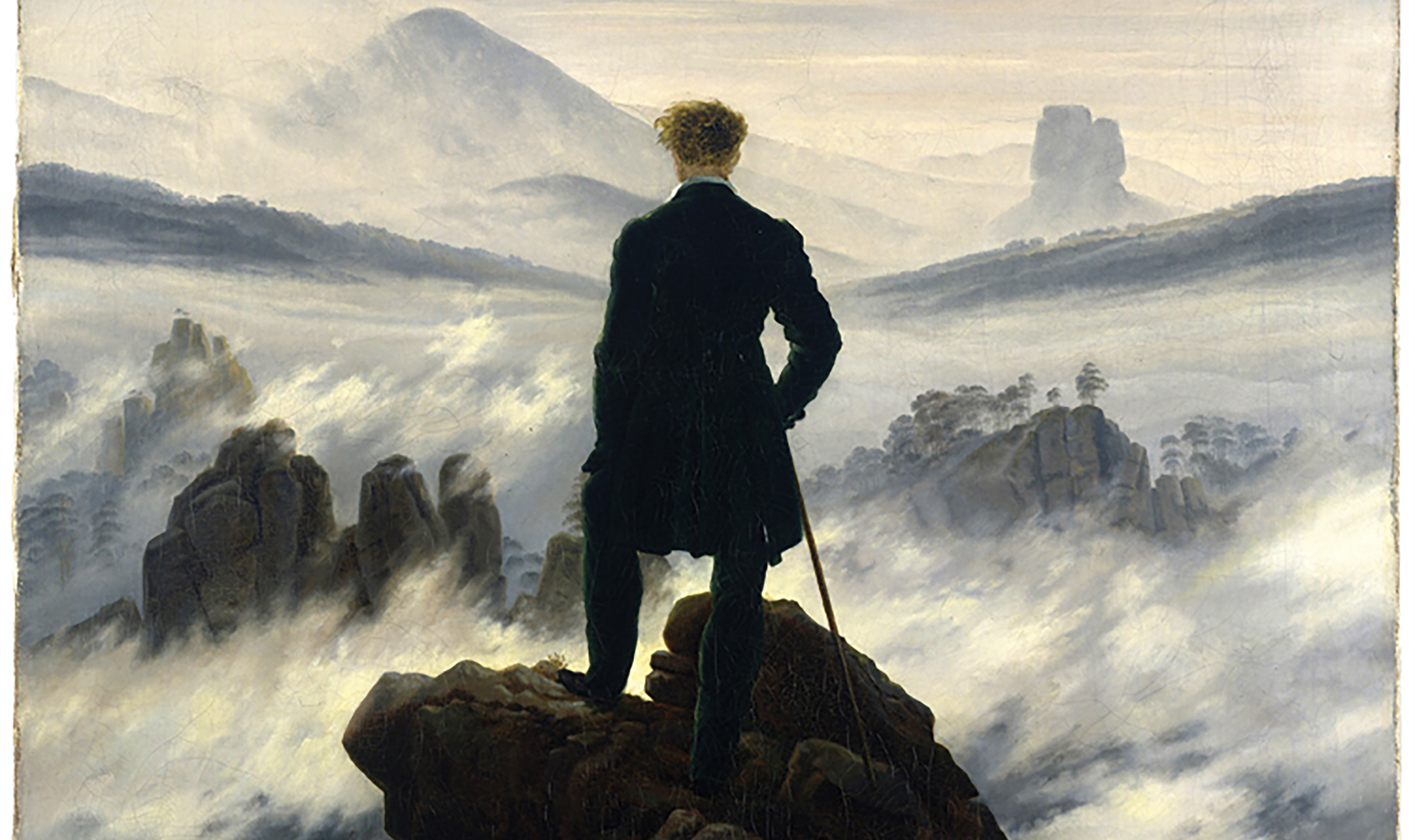 The romantic school of art, wrote Ayn Rand, “is concerned—in the words of Aristotle—not with things as they are, but with things as they might be and ought to be.”1 In her esthetic writings, Ayn Rand elaborated on this idea relative to her own field, the novel. But she said little about how it applies to the visual arts; and, when asked, she commented, “I wouldn’t claim that the classifications I’ve defined for literature hold for the other realms of art. Someone would have to establish that.”2

In taking up this challenge, I can think of no better artist to analyze than the German painter Caspar David Friedrich (1774–1840).

Although estheticians do not agree about what, fundamentally, makes a romantic artist, everybody agrees that Friedrich is one. The state of affairs is captured by art historian Joseph Koerner’s question: “What does it mean to say that Caspar David Friedrich is a quintessentially Romantic painter?”—and by his rather inadequate answer: “As evocation of the faraway and indistinct, as the evocation of an evocation, Romantic names that which is properly unnameable about the project of Romanticism.”3

Ayn Rand provided a more helpful approach. Romantic art, she wrote, “deals, not with the random trivia of the day, but with the timeless, fundamental, universal problems and values of human existence.”4 And at its highest development, the concern of romantic literature “is not merely with values, but specifically with moral values and with the power of moral values in shaping human character.”5

Friedrich held similar views in regard to painting. “To many it is incomprehensible that art has to emerge from a person’s inner being,” he wrote, “that it has to do with one’s morality, one’s religion.” But so it does. “You should trade only in what you recognize to be true and beautiful, noble and good in your soul.”6

And indeed, Friedrich’s paintings typically deal (from his own perspective) with man’s noblest, most exalted moral values and abstractions.

1 Ayn Rand, “Introduction to the Twenty-fifth Anniversary Edition,” in The Fountainhead (New York: Signet, 1993), p. v. See also my “What Might Be and Ought to Be: Aristotle’s Poetics and The Fountainhead,” in Essays on Ayn Rand’s The Fountainhead, edited by Robert Mayhew (Lanham, MD: Lexington Books, 2007), pp. 155–75.

10 Ayn Rand, “Basic Principles of Literature,” p. 85. Ayn Rand commented on the role of the plot conflict in isolating the abstract theme of both The Fountainhead and Cyrano de Bergerac. See the quotes in my “What Might Be and Ought to Be,” p. 169; and in Shoshana Milgram, “Three Inspirations for the Ideal Man,” in the same collection, pp. 192–93. I discuss the mechanics of this kind of abstract isolation in “What Might Be and Ought to Be.” In regard to the plot-theme, not the theme, serving as the direct standard of selection, see Ayn Rand, The Art of Fiction: A Guide for Writers and Readers, edited by Tore Boeckmann (New York: Plume, 2000), p. 31.

14 Quoted in Helmut Börsch-Supan, Caspar David Friedrich (New York: George Braziller, 1974), p. 78. This passage refers to the trees in the painting as “firs” (in English translation, I do not know the German original). They are in fact spruces, as are the conifers in the next two paintings I analyze. The confusion of spruces with firs or pines is common in the literature on Friedrich.

15 Note that as a tabula rasa one could not understand any object in a painting. As Aristotle writes in the Poetics, “men enjoy looking at images, because what happens is that, as they contemplate them, they apply their understanding and reasoning to each element (identifying this as an image of such-and-such a man, for instance). Since, if it happens that one has no previous familiarity with the sight, then the object will not give pleasure qua mimetic object but because of its craftsmanship, or colour, or for some other such reason.” Stephen Halliwell, The Poetics of Aristotle (London: Duckworth, 1987), p. 34 (Poetics, ch. 4).

16 Quoted in Schmied, Friedrich, p. 46. I have slightly modified the punctuation of this quote.

23 I discuss some other artists whose works bear the same hallmark in my note “Some Romantic Artists” on my website: www.toreboeckmann.com.