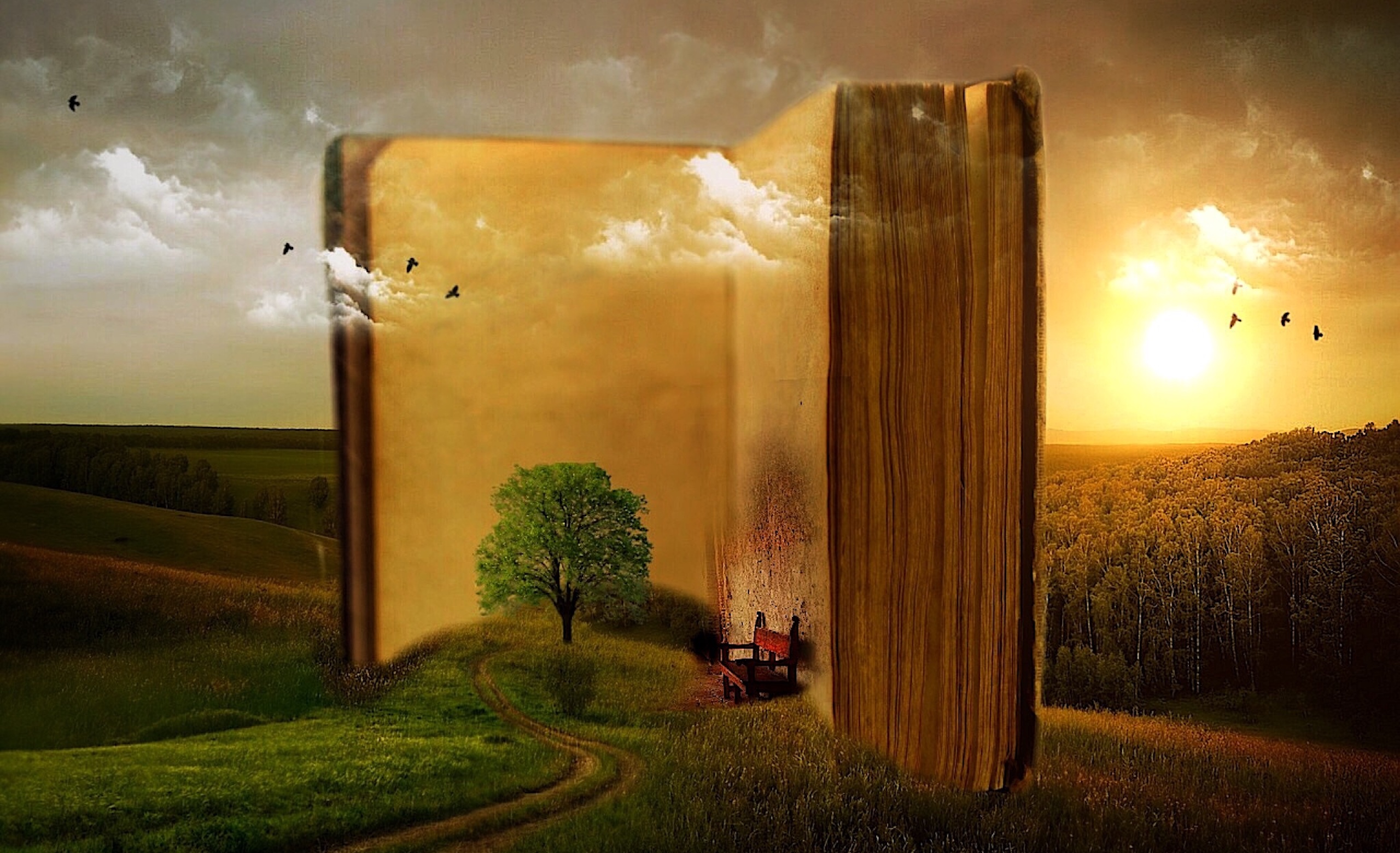 Although economic and social restrictions are easing in some parts of the world, most of us aren’t yet seeing the light at the end of the lockdown tunnel. Here are twenty more uplifting, inspiring, and/or philosophically valuable works of art to keep you going for the next month or two.

Lost Enlightenment by S. Frederick Starr
By and large, Central Asia is underappreciated in the tapestry of history. In Lost Enlightenment, historian S. Frederick Starr takes readers on a fascinating journey through Persian, Turkish, and Iranian history from 800 to 1200 AD, a period in which many brilliant thinkers and artists made heroic advancements in architecture, economics, poetry, literature, mathematics, and many other fields.

Bridge to Terabithia by Katherine Paterson
Writing a novel that appeals both to children and adults is extraordinarily difficult, but Katherine Paterson did it admirably with Bridge to Terabithia. The book tenderly explores an unlikely but deep friendship between two children who build an imaginary kingdom in the forest and inspire the adults in their lives to reconsider their beliefs about the practicality of dreaming big.

Calvin and Hobbes by Bill Watterson
Widely lauded as one of the best comic strips of all time, Calvin and Hobbes ran for ten years and is now available in a complete boxed set. The strip follows the hilarious adventures (and misadventures) of precocious six-year-old Calvin and his stuffed tiger, Hobbes, as they build time machines out of cardboard boxes and fly to Mars in a Radio Flyer wagon. Watterson’s ability to write both hilarious and thought-provoking dialogue is truly marvelous.

Be Free or Die by Catherine Lineberry
Be Free or Die is an awe-inspiring biography of Robert Smalls, a man born a slave who stole a Confederate ship and fought for the Union to end slavery in America. Lineberry’s account of his life before, during, and after the Civil War is a gripping tale of a true American hero—one who also had a strong sense of justice and a delightful sense of humor (e.g., he eventually purchased the house in which he’d formerly been enslaved).

The Iliad and The Odyssey by Homer
Homer’s 2,800-year-old epic poems, The Iliad and The Odyssey, are among the oldest and greatest works of literature. Both tell the story of the hero, Odysseus, a man of ironclad determination who fights in a long war and challenges the gods themselves when they try to prevent him from returning home. These highly entertaining, timeless classics highlight man’s limitless potential.

I Am Legend by Richard Matheson
I Am Legend is the story of one man’s struggle to survive when (as far as he knows) every other person on Earth has become a vampire. Protagonist Robert Neville is an everyman who knows nothing about virology or most other advanced sciences; his explicitly epistemological quest to understand the cause of vampirism makes the novel noteworthy. (Despite advertising to the contrary, the 2007 film I Am Legend has virtually nothing in common with the book.)

Red Sparrow, written by Justin Haythe and directed by Francis Lawrence
Red Sparrow is a complex, cerebral, and visceral thriller about the horrific impacts of communism and socialism on the human psyche. Often mischaracterized as “just another spy movie,” the film is a well-acted and intelligent (if philosophically mixed) tale of one woman’s struggle to survive under the evil ideology that still lingers in parts of modern-day Russia.

Fearless (2006), written by Chris Chow, Christine To, Wang Bin, and Li Feng; directed by Ronny Yu
Fearless, starring Jet Li, is a martial arts movie loosely based on the life of 19th-century martial artist Huo Yuanjia—and it has surprisingly deep things to say about several important values. As portrayed by Li, Yuanjia is an arrogant and cruel young man whose rash decisions eventually lead to the deaths of his mother and daughter. As he grows older, he gradually comes to understand the true natures of justice, compassion, confidence, and honor.

The Unbreakable Kimmy Schmidt (seasons 1 and 2), created by Tina Fey and Robert Carlock
Unfortunately, writers—comedy writers in particular—often mock optimism in their work. Refreshingly, this is not the case in The Unbreakable Kimmy Schmidt. The titular protagonist’s relentlessly chipper attitude inspires (most of) her friends and clearly helps her to achieve the goals most important to her. The show’s jokes are clever and almost always benevolent. Unfortunately, the third season largely trades fresh and witty humor for hackneyed identity politics, but the first two seasons are definitely worth watching.

Mission Impossible: Fallout, written and directed by Christopher McQuarrie
Most of the Mission Impossible films are entertaining, if philosophically thin. Fallout is just as action packed as its predecessors, but its implicit elevation of individualism and heroism deserves special praise, as does its explicit condemnation of collectivism and nihilism. The plot is engrossing, well-written, and inspiring, particularly for an action movie.

The Witch, written and directed by Robert Eggers
Although The Witch isn’t exactly inspiring or uplifting—at least not directly—it is a strikingly perspicacious, cautionary tale about the dangers of faith. A 17th-century Puritan family is exiled from their village for an unspecified infraction, and in their new home, their religious paranoia has devastating consequences. The less you know about The Witch prior to watching it, the better, but be advised: It is a horror movie.

The Birdcage, written by Elaine May and directed by Mike Nichols
The Birdcage is a smart, sensitive, and hilarious comedy about being true to oneself, even (and especially) when others object. Robin Williams and Nathan Lane star as gay nightclub owners who pretend to be straight for a weekend so as not to offend their future daughter-in-law’s ultraconservative parents. In particular, fans of Mrs. Doubtfire will appreciate Williams’s equally uproarious performance in The Birdcage.

Firefly, created by Joss Whedon
Without question, Firefly is the best Chinese-Western space adventure of all time. The show, which intelligently explores themes of free will and individualism (among others), follows a ragtag band of smugglers who routinely defy an authoritarian government. Unfortunately, the series ran for only a single season, but the 2005 film Serenity wraps up the story reasonably well, considering the show’s abrupt cancellation.

October Sky, written by Lewis Colick and directed by Joe Johnston
Based on the true story of NASA engineer Homer H. Hickam, October Sky is a heartwarming drama about a teenager inspired by the launch of Sputnik to design rockets. He rebels against his father, his teachers, and naysaying townspeople, refusing to renounce his “unrealistic” dream. His persistence eventually takes him from the state science fair to a prestigious college, and finally to an elite position at NASA.

Tomb Raider (2013), developed by Crystal Dynamics
The 2013 reboot of Tomb Raider is a crisply written tale of determination and heroism. When twenty-one-year-old archaeology student Lara Croft is shipwrecked on a cursed island near Japan, she must overcome the unforgiving landscape, rescue her friends, and escape alive. Lara’s transformation from naive college girl to crafty, confident survivor is one of the best video game character arcs of the last decade.

Mass Effect trilogy, developed by Bioware
The classic “humans versus aliens” sci-fi story has been done a thousand times but rarely as well as Mass Effect does it. The trilogy follows Commander Shepard, a Marine leading a small force of elite operatives who stand between a hostile race of aliens and the rest of the galaxy—but no one else believes that the threat even exists. Above all, the games dramatize the nobility (and the heartrending frustration) of fighting to defend life-serving values when everyone around you thinks you’re wrong or crazy.

Portal 2, developed by Valve Software
Portal 2’s puzzles and its deadpan writing are both brilliant. Knowledge of the first Portal is helpful but not necessary to enjoy the sequel. In it, players can solve more than one hundred puzzles alone or with a friend, all under the overly critical supervision of a bored, sentient computer. The game is packed with clever jokes, and it encourages creative, conceptual thinking.

Assassin’s Creed II, developed by Ubisoft
The Assassin’s Creed franchise includes more than thirty games, many of which are thinly veiled cash grabs. Assassin’s Creed II, though, is a narrative-driven stealth game about the basic conflict between individualism and authoritarianism. Although the writing is philosophically mixed, the strong parts of the script are very strong indeed, and the protagonist’s transformation from brash playboy to intellectual freedom fighter elicits comparisons to Francisco d’Anconia from Atlas Shrugged.

Mirror’s Edge, developed by DICE
In the not-so-distant future depicted in Mirror’s Edge, governments around the world have become true police states and have heavily restricted free speech. Because all electronic communications are monitored, freedom fighters employ “runners” to carry handwritten messages on foot. Players take on the role of one such runner and guide her through an exhilarating, largely nonviolent fight against the authoritarians in power.

Alien: Isolation, developed by Creative Assembly
Alien: Isolation takes place fifteen years after the first Alien film and features Amanda Ripley, daughter of the film’s protagonist. Employing highly unusual design choices, the game makes it completely impossible for players to harm or kill the alien; instead, they must outwit it to survive. Only through patience and clever tactics will players be able to evade the terrifyingly intelligent alien and escape the space station alive.

I hope that some of these books, movies, and games will help to keep your spirits high and your mind sharp until life returns to normal. (If you missed my first twenty recommendations for soul-fueling art, be sure to check them out!)

Here are 20 more uplifting, inspiring, and/or philosophically valuable works of art to help keep your spirits high and your mind sharp until life returns to normal.
Click To Tweet