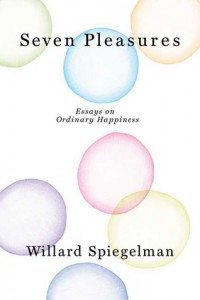 In Seven Pleasures: Essays on Ordinary Happiness, Willard Spiegelman asks: “In adulthood, what should—what does—one read? No longer having the luxury of youthful promiscuity, knowing that the clock ticks, that every choice of something eliminates something else, what should you do?” (p. 49).

Spiegelman suggests rereading “those books that gave pleasure in the past.” He adds:

A photographic memory is not necessarily a blessing; there’s a charm in forgetting, so if you’re not cursed with perfect recall, you’ll have the joy of discovering some things as though for the first time, while others will hit you with the refreshing rush of repetition. As an older version of the person you’ve always been, you can have things two ways at once: something old, something new; something recalled, something revealed. (p. 49)

Although Spiegelman does not directly advise going back to what one loves and extracting still more pleasure from it, or learning to convert a declining memory into a source of enjoyment, he nevertheless provides example after example of himself doing just such things. Whereas other books about happiness tell readers how to become happy, in Seven Pleasures Spiegelman simply discusses the activities that have made him happy and shows how he has learned to deeply enjoy his life.

The activities, without exception, are unexceptional. They are reading, walking, looking, dancing, listening, swimming, and writing. But Spiegelman approaches them in a remarkably new way. Consider this, on dancing:

The fox-trot, like the waltz, the two-step, the polka, the swing, and all the others, has no raison d’être. There is no justification for it but one. I would like to understand Wallace Stevens’s adverb—in the phrase “merely circulating”—quoted . . . neither in its modern, deprecating sense nor in any other ironic one, but in its etymological truth: “mere” means “pure,” “undiluted,” “perfect.” Likewise, dancing again and again around the floor produces the human feeling that partakes of the essential and the ornamental in equal measure, what Wordsworth, in the preface to Lyrical Ballads, labeled the “grand elementary principle . . . that constitutes the naked and native dignity of man”: pleasure, pure and simple. (p. 124)

Spiegelman’s approach to dancing is unabashedly sensual and, at the same time, intellectual. For example, in addition to discussing what he enjoys about dancing, he integrates what authors he loves have said about it and, later in the book, how this activity relates to others he finds enjoyable.

Dancing is the only inherently social activity Spiegelman discusses, and he says he finds the others more enjoyable when done alone. For example, he notes that “walking alone, rather than with a partner, gives the double pleasure of setting and changing the pace, instead of compromising.”

You go at your own speed, not someone else’s. You can make unapologetic last-minute, arbitrary, if not downright mercurial, adjustments in direction or purpose. You wander with the uncertainty of the wind itself, but ever grounded by the asphalt and the surrounding architecture. You want to pop into a shop? Feel free. You want to take a sudden turn down a tempting alley? Go ahead. Sit in a café for no reason? Not a problem. You want to go out of your way and cross a bridge just to take in the view from the other side and then come back? No one will stop you. You are the conductor, the boss. (p. 64)

Spiegelman enjoys going to view art alone for a similar reason. “There’s a rhythm to museumgoing that requires silence and solitude,” he says. “The ear and tongue become quiet and the eye opens, in order to feed something like the soul” (p. 94).

The ideal is to be alone with a painting, one at a time. I envy those people who, especially in the days when museums cost little or nothing, had the luxury of wandering in at lunch to look at a single object. It’s the pause that refreshes. And that also deepens one’s consciousness. Like Robert Browning’s Duke of Ferrara in “My Last Duchess,” who draws open the curtain to view the picture of his late wife, and thereby exercises total control over her and his audience, I want to be an epicurean of enjoyment. Last year I visited the Brera Gallery in Milan, a treasure trove of Italian painting. I had come to see two things in particular, but did not shut my eyes to others. One of my intended pictures was Piero della Francesca’s late Montefeltro altarpiece. It hangs in a badly lighted room with four other pictures from the school of Urbino. No other person shared the space; no one blocked my view; no one spoke. The museum itself was fairly empty, a couple of polite British tour groups and some random single visitors wandering through. I asked the helpful, informative guard whether I might move a chair to a position right in front of the painting, which was set apart by a metal rail. He graciously allowed me to do so, and he even let me sneak for a minute behind the railing in order to get an up-close look at the brushwork. I was alone with Piero and my own thoughts. The solitude lasted twenty-five minutes before another human being wandered in. This is how pictures should be looked at.

Another time I ambled into the print room at Harvard’s Fogg Museum, and the graduate students enthusiastically brought out Ingres sketches and watercolors for me alone to see. One at a time, I felt like a prospective buyer or, even better, the actual owner. I could touch the paper. It’s not that I want to prevent others from looking, even if they’re in the same room with me at the time. Rather, I know that the greater the audience, the greater the distraction, and viewing pictures, unlike attending a play, is not a spectator sport. (pp. 95–96)

More than once, Spiegelman focuses on limiting distractions and becoming absorbed in an activity. “The senses do not wish to multitask,” says Spiegelman. “At least mine do not” (p. 143). So he likes to listen to music with his eyes closed, just as he likes to look at art in silence.

He further observes how engaging in an activity enables one to garner even greater enjoyment when coming to it as a spectator. In an essay on writing, for example, he puts it this way: “Playing an instrument makes you a better listener of good music; painting helps you to appreciate the Old Masters; and writing should lead you to be a better reader” (p. 182).

Spiegelman’s goal no matter the activity is the same: He is out to enjoy himself, and, at least after turning fifty, he is purely concerned with his own pleasure:

[A] week following my fiftieth birthday, I had sunk into a momentary, uncharacteristic mini-depression, not quite a full-blown existential crisis or the dark night of the soul, just a dreary afternoon of clouded vision. Outside, it was January, bleak, gray, cold, and wet. Inside, I asked myself what life meant. And then it came to me: I realized that when one is fifty, life is more than half over, which is not necessarily true at forty. And, therefore, after fifty, one should not do anything one does not want to do, unless it is absolutely necessary. The happy man becomes a sprightlier version of Melville’s Bartleby the Scrivener. “Can you come to dinner next week?” “I’m so sorry, I won’t be able to.” “Will you serve on the committee to change the university calendar?” “I’m sorry, I would prefer not to.” No further defense, explanation, apology required. What a relief. Pleasure begins to trump duty. Voltaire said that “the pursuit of pleasure must be the goal of every rational person,” and if you add maturity to rationality as a factor to account for, then after fifty it’s pleasure all the way. (pp. 5–6)

Although I certainly don’t condone everything Spiegelman says there (e.g., the notion that one could ever have a “duty”), that passage is remarkable in a certain respect, and it serves as a microcosm of the book. Throughout Seven Pleasures, Spiegelman repeatedly shows himself artfully dodging anything that distracts him from fully enjoying a chosen activity. Here he consciously and explicitly rejects “duty” in order to fully embrace life and the pleasures of living.

Like that passage, Seven Pleasures has occasional flaws. Even so, the book is a wonderfully refreshing addition to the literature on happiness. Here is a final indication of why:

Everyone has what I call the phantom vita: prizes not won, jobs applied for but not offered, unrequited love. So what? If you miss a bus, you can get on the next one. We should not overly lament life’s ordinary disappointments, but we must celebrate—soberly, not giddily or smugly—its ordinary pleasures. (p. 4)

Seven Pleasures itself is a cause for celebration, for it is more than a vivid depiction of how to pursue pleasure; it is a pleasure to read.

Daniel Wahl is assistant editor at The Objective Standard.

View all articles by Daniel Wahl →
Timothy Sandefur on the Conscience of the ConstitutionSo Good They Can’t Ignore You, by Cal Newport
Return to Top