‘The Earth Becomes My Throne’: Individualism in Metallica’s Black Album

Today, Metallica is a household name, which, especially considering the relatively low penetration of heavy metal music into the mainstream, is no small achievement. As the best-selling metal band on Earth, their music is commonly heard in TV shows, movie soundtracks, and video games.

This wasn’t the case for the first ten years of the band’s existence. Metallica’s first four albums garnered a significant following, but nothing like the success they would meet with the Black Album. The public response to Metallica changed dramatically upon its release in 1991, and the band has continued to sell out world tours ever since. The Black Album recently celebrated 550 continuous weeks on the Billboard 200, a record surpassed only by Pink Floyd’s Dark Side of the Moon.1

The Black Album’s rare status as a heavy metal album that penetrated the mainstream is not the only noteworthy thing about it, however. It is, in many respects, an ode to individualist ideals. Its success in encapsulating these ideas in musical form and bringing them to a global audience is truly unique.

The first clue to the album’s philosophical leanings comes from the cover art. Although the album is officially self-titled, it’s universally referred to as the “Black Album,” a name that springs from the fact the cover is almost entirely black, save for two graphics: the band’s logo and a coiled snake. This is the snake from the Gadsden flag, a symbol with origins in the American Revolution, which often is associated with individual rights and opposition to tyrannical government. The Gadsden flag also features the motto “Don’t Tread On Me,” which is the name of the Black Album’s sixth track.

The album’s first two tracks are two of the band’s most successful singles, although they have the least to do with the album’s philosophic theme: “Enter Sandman” is their best-known hit, a radio-friendly song about childhood nightmares that has become a staple of all of the band’s live shows; and “Sad But True” is a down-tuned heavy metal anthem about dealing with inner demons and addiction. These are both great songs without which Metallica may never have become as popular or successful as they are today.

The album really gets into its thematic stride starting with the third track, “Holier Than Thou,” which describes the difficulty of dealing with people more interested in the affairs of others than their own—those who derive a superficial sense of satisfaction from denigrating others rather than from achieving things for themselves. It states, “It’s not who you are, it’s who you know; others’ lives are the basis of your own.” This is an example of what novelist and philosopher Ayn Rand called second-handedness, which describes those who subvert their own judgment to other people’s opinions instead of choosing and pursuing values based on their own thinking. With fast-paced riffs and a driving rhythm, “Holier Than Thou” packs a powerful sonic and philosophic punch into its 3:48 run time, one of Metallica’s shortest.

In the fourth track, “The Unforgiven,” the band takes aim at collectivism—the idea that the individual should be subjugated to the group. The song deals with the theme of forced conformity, describing a child who is “deprived of all his thoughts” as soon as he is born and forced to learn and follow the rules of his society. The boy in the narrative vows to maintain his own will in spite of the controlling environment in which he finds himself. This song was a musical evolution for a band that, until this album, had written almost exclusively in a fast-paced, aggressive thrash metal style. Not only is “The Unforgiven” a relatively slow, reflective piece with delicate instrumentation that gradually builds up to one of the most moving guitar solos in rock history, but it is also a deeply intricate story, reminiscent of great progressive rock works, such as Rush’s 2112: It delivers an entire narrative about a free-spirited individual who struggles in a repressive society.

The fifth track, “Wherever I May Roam,” an epic, seven-minute testament to life on the open road, beautifully portrays a theme of proud self-sufficiency:

And the earth becomes my throne
I adapt to the unknown
Under wandering stars I’ve grown
By myself but not alone, I ask no one

This describes a person living for himself, not dependent on others (“and my ties are severed clean” opens another verse)—one who bears notable resemblance to the man depicted in Charles Badger Clark’s ode to independence, “The Westerner.”2 This theme, combined with a unique, spacious sound and long-ringing notes, makes for one of the most immersive listening experiences on the album.

“Don’t Tread on Me” is the album’s clearest statement of its most pronounced theme: individualism. The title alludes to the Gadsden flag (which was hung in the studio during the recording sessions), and the song begins with a guitar rendition of the chorus of “America” from the musical West Side Story. The lyrics reference Patrick Henry’s famous “Give me liberty, or give me death!” speech and mirror a powerful metaphor offered by Benjamin Franklin in a 1775 letter. In it, he likened America’s vigilance in defense of individual rights to a timber rattlesnake, writing, “She never begins an attack, nor, when once engaged, ever surrenders.”3 Or, as Metallica put it,

Liberty or death, what we so proudly hail
Once you provoke her, rattling of her tail
Never begins it, never, but once engaged
Never surrenders, showing the fangs of rage 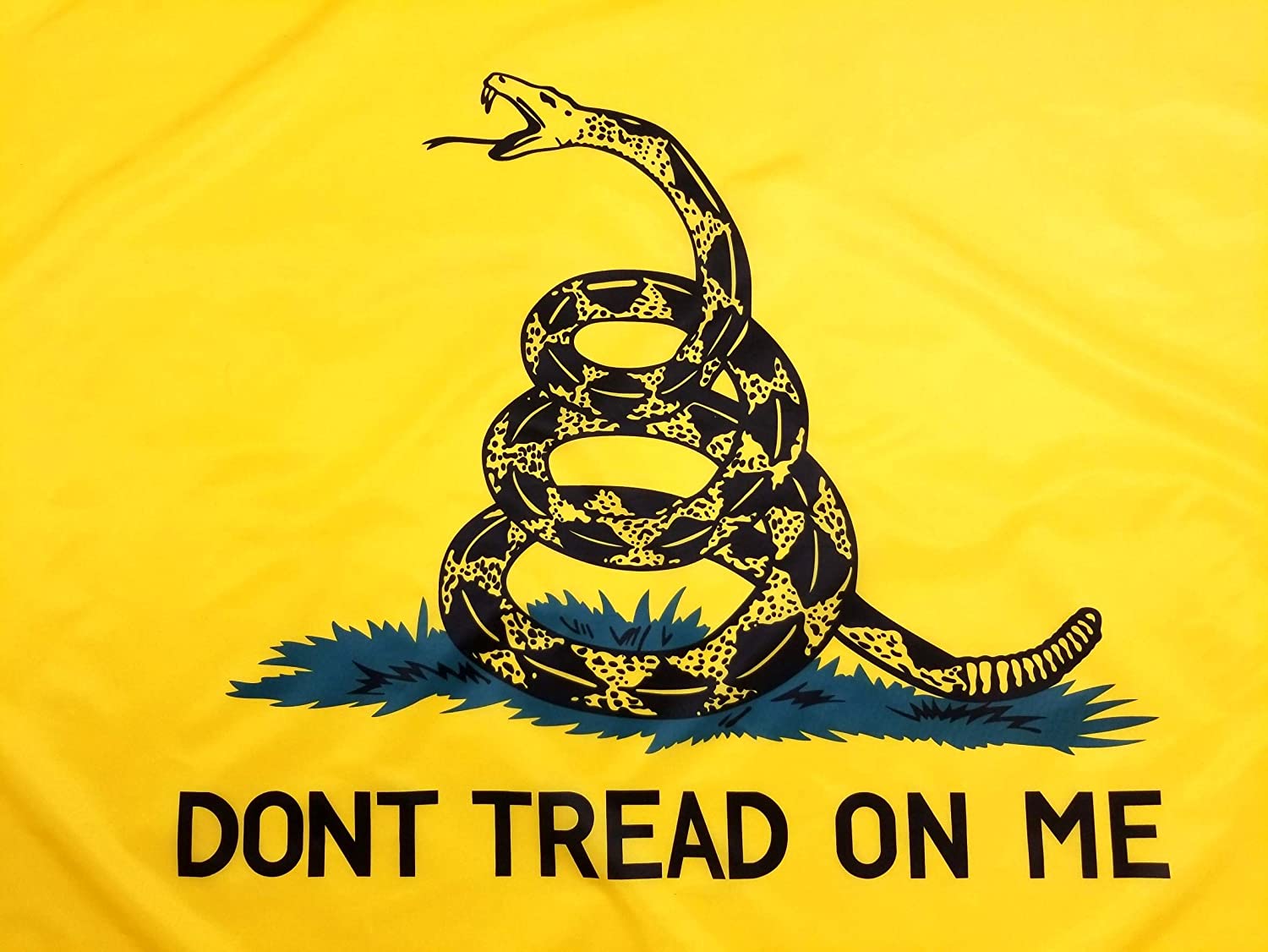 Although tracks three through six are the album’s most overt statements of its individualist theme, the later songs reinforce it in less obvious ways. “Through the Never” is a curiosity-driven dive into questions about space and time, describing the human thirst for knowledge and the “pursuit of truth no matter where it lies.” “Nothing Else Matters” is arguably the band’s first true ballad, a melodic, heart-wrenching song about being separated from a loved one. Every verse describes feelings of separation and pain, each ending with the phrase “nothing else matters.” One of these is followed by the line “Never cared for what they do, never cared for what they know,” describing a relationship unfettered by concerns of what others think. All that matters is the love the two people share for each other.

“Of Wolf and Man” is a fun aside from the album’s more philosophic material, essentially just a song about transforming into a werewolf. Nonetheless, it’s a well-crafted track built around a strong beat and catchy guitar work. Next, the album returns to heavy philosophy with “The God That Failed,” an all-out attack on fervent religiosity, motivated by front man and songwriter James Hetfield’s own experience with his mother. After refusing medication and treatment on the belief that she would be saved by God, she succumbed to cancer when Hetfield was only sixteen.4

“My Friend of Misery” is another track that, like “Holier Than Thou,” critiques people with a particular type of personality—in this case, those who view life as endless tragedy and who seem to think that every problem in the world is theirs to bear and solve. “You insist that the weight of the world should be on your shoulders,” goes the chorus, followed by, “There’s much more to life than what you see, my friend of misery.” Although critical of such miserable people, the song provides sound and positive counsel, pointing out that those who allow themselves to become absorbed in negativity miss out on the joy and fulfillment that—with a change in attitude—they could achieve.

The final track, “Struggle Within,” addresses those struggling to make their lives meaningful. “So many things you don’t want to do, what is it? What have you got to lose?,” it asks, pointing out, “Advantages are taken, not handed out.” It’s a short song with a fairly straightforward message, yet it also nicely reprises the album’s theme by advocating a self-driven attitude and a focus on one’s own values.

The Black Album exalts individualism, liberty, self-interest, personal development, and the importance of the reasoning mind. It’s an appropriate theme given the enormous amount of work and dedication that the album took to produce: eight months of long studio sessions, beset with constant arguments and endless retakes. Three of the four band members even went through divorces during its production.5 Nevertheless, they pushed through to create an album that would transform their lives. While making it, Hetfield aptly summed up the band’s philosophy, saying, “I donʼt think we need to justify ourselves at all. Weʼre doing our shit our way. The integrity is there.”6 The result speaks for itself.

Thomas Walker is an assistant editor of The Objective Standard. He holds a master’s degree in music from Oxford Brookes University. His hobbies and interests include travel, aviation, photography, and science.

1. “Metallica are Officially the Biggest Metal Band in the World,” Kerrang Magazine, September 18, 2019, https://www.kerrang.com/the-news/metallica-are-officially-the-biggest-metal-band-in-the-world/; “Metallica’s ‘Black Album’ has been on Billboard 200 for Over 550 Weeks,” Loudwire, December 10, 2019, https://loudwire.com/metallica-black-album-billboard-200-550-weeks/.

3. Franklin wrote in The Rattlesnake as a Symbol of America (1778): “I recollected that her eye excelled in brightness, that of any other animal, and that she has no eye-lids—She may therefore be esteemed an emblem of vigilance.—She never begins an attack, nor, when once engaged, ever surrenders: She is therefore an emblem of magnanimity and true courage.—As if anxious to prevent all pretensions of quarreling with her, the weapons with which nature has furnished her, she conceals in the roof of her mouth, so that, to those who are unacquainted with her, she appears to be a most defenseless animal; and even when those weapons are shown and extended for her defense, they appear weak and contemptible; but their wounds however small, are decisive and fatal:—Conscious of this, she never wounds till she has generously given notice, even to her enemy, and cautioned him against the danger of stepping on her.—Was I wrong, Sir, in thinking this a strong picture of the temper and conduct of America?” Sourced from Naval Documents of the American Revolution (United States, Naval History Division, 1968), 267.

5. Guitarist Kirk Hammet, drummer Lars Ulrich, and bassist Jason Newsted all went through divorces during the production of the album; “The Most Expensive Rock and Metal Albums of All Time,” Kerrang Magazine, https://www.kerrang.com/features/the-most-expensive-rock-and-metal-albums-of-all-time/ (accessed April 29, 2020).