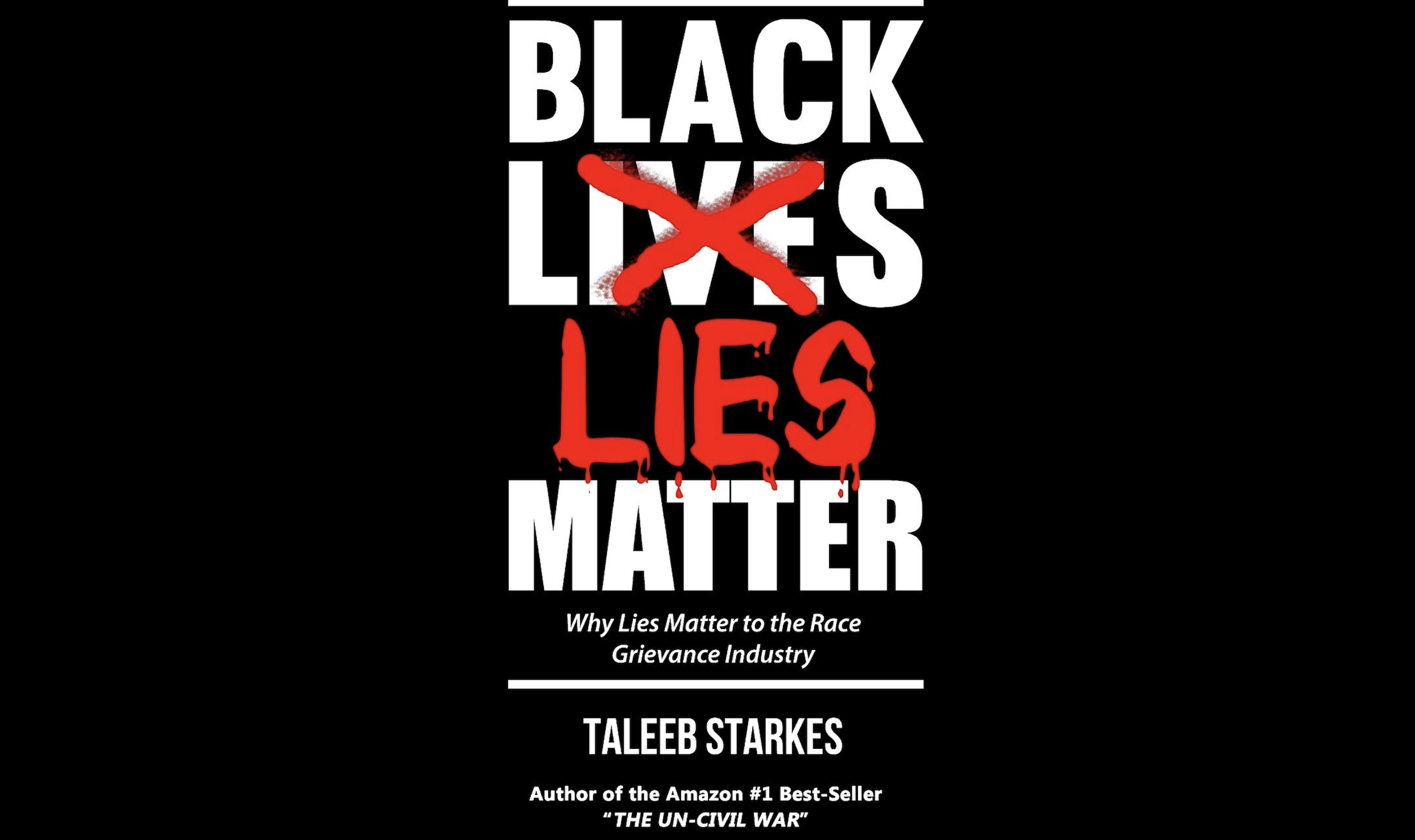 The dominant narrative regarding U.S. race relations today is that the primary danger to black lives stems from white racism, particularly that of violent, racist cops. This view holds that America is a hopelessly racist nation. An organization, Black Lives Matter (BLM), has arisen to lead protests and even riots in response to instances where a white man, especially a police officer, kills a black person.

Taleeb Starkes’s 2016 book, Black Lies Matter: Why Lies Matter to the Race Grievance Industry, is a courageous, prescient, and truthful account of burgeoning racial conflicts, and its vital message is of life-or-death importance.

One of the book’s most arresting points—backed by a plethora of evidence—regards what is by far the gravest danger to black American lives: black thugs.

“For every Trayvon Martin killed by someone not black [whether white, Asian, or Latino], nine other blacks were murdered by someone black,” wrote John W. Fountain, an award-winning journalist, and professor at Roosevelt University. . . . [Fountain continues,] Imagine Soldier Field . . . filled beyond capacity, brimming with 63,879 young African-American men, ages 18-24—more than U.S. losses in the entire Vietnam conflict. Imagine the University of Michigan’s football stadium—the largest in the U.S.—filled to the limit of 109,901 with black men. Now add 28,233 more—together totaling more than U.S. deaths in World War I. . . . The national tally of black males 14 and older murdered in America over a 30-year period from 1976-2005, according to the Bureau of Justice Statistics: 214,661 [roughly 192,000 of which were killed by blacks]. (30)

It gets worse. Starkes writes, “The numbers tell only part of the story of this largely urban war, where the victims [bear] an uncanny resemblance to their killers” (30). As Starkes details, some of the black-on-black murders are unspeakably ghastly. For example, in 2014 in the Detroit suburb of Inkster, a gangbanger walked onto the porch of a rival gang member and shot his two-year-old daughter, Kamiya French, in the head, killing her in front of her father to make him suffer (56). In 2015 in Chicago—which is often referred to by law enforcement as “Chiraq,” because its high-crime areas are akin to combat zones—a gang member shot nine-year-old Tyshawn Lee in the head, murdering him to punish his father, a member of a rival gang. The murderer even composed a rap to commemorate the killing (60–61).1

“According to BLM’s official website,” Starkes points out, “its members ‘affirm that all Black Lives Matter’” (52). And yet, every year thousands of black lives are snuffed out by black thugs—“urban terrorists,” as Starkes aptly describes them—and we do not hear a peep out of BLM. The numbers that Starkes cites regarding black-on-black murders are evidence of a Holocaust. Yet, judging by BLM’s closed-eyes, closed-mouth silence, the group regards this as a nonissue.

Why? How can an organization purportedly dedicated to the premise that black lives matter evade what is by far the gravest threat to black lives? “Clearly [BLM’s] ‘All Black Lives Matter’ motto doesn’t apply to the black lives turned into anti-matter by black thugs.” Starkes observes that the only victims BLM considers “qualified” for attention are blacks who are killed by whites (52).

As Starkes makes clear, BLM gives carte blanche support to those who “qualify,” without regard to the relevant facts of any given case. For instance, Freddie Gray was a career criminal with a rap sheet of twenty cases, most involving drugs but some involving malicious destruction of property, multiple instances of second-degree assault, and fourth-degree burglary (83–84). Michael Brown, killed by an officer in Ferguson, Missouri, first assaulted that officer.2

Such facts do not matter to BLM, which fetes the memory of such criminals, often resulting in the obscene spectacle of a thug commemorated as a hero. Such thugs are compared to icons of the civil rights movement such as Martin Luther King Jr. The thug’s funeral is live-streamed, his family gets a settlement, and so forth. For example, Ferguson, Missouri, gave Michael Brown’s family a $1.5 million settlement; Baltimore gave Freddie Gray’s family a $6.4 million settlement.

Some relevant questions in all such cases are: Was the killing in cold blood—or self-defense? Was the person killed an aggressive and threatening thug—or a two-year-old girl? Was he perpetrating a crime—or was he utterly innocent? To BLM, all such questions are irrelevant. All that matters is the race of the victim and the race of the killer. “Clearly, only a specific kind of black life matters to the BLM movement. . . . the more accurate name or hashtag is #BlackLivesMatterWhenTakenByWhites” (30).

Starkes gives sufficient raw data for us to draw a baleful conclusion: BLM is an utterly racist organization that cares little or not at all about innocent black lives. Its leaders consider skin color to be the only important attribute of any given individual. They do not consider an individual’s character, justice, or the protection of all people’s individual rights.

BLM is but one of many organizations making up what Starkes calls the “Race Grievance Industry” (RGI). He writes:

The RGI’s sole purpose is to profit from racial strife under the guise of pursuing racial peace. Its modus operandi is rooted in a lie that refuses to die: blacks are permanent victims of racism and no amount of effort will overcome it. . . . the message remains unchanged—America is a racist labyrinth specifically designed to stifle black advancement. (1)

Starkes holds that the RGI promotes the theory of “exploitivity”—the idea that “racism [is] the motive for any disagreeable white-on-black incident” (2). The RGI considers this to be an unquestioned absolute; it is not to be discussed or debated, only accepted and promulgated. According to Starkes, this “Theory of Exploitivity has revolutionized the science of victimology while generating untold wealth for its practitioners” (3).

“Shakedown Al” Sharpton (as Starkes accurately dubs him) is a prime example. “For years, ‘Shakedown’ Sharpton . . . has enriched himself by threatening companies with bad publicity if they didn’t financially support his agenda” (3). Indeed, Sharpton has made a career of perpetuating racial conflict.3 According to Starkes, “Anheuser-Busch gave him six figures. Colgate-Palmolive shelled out $50,000.00 and Macy’s and Pfizer have contributed thousands to the Reverend Al Sharpton’s charity” (3–4). Dozens of other companies have placated “Shakedown Al,” shelling out ludicrous amounts of money to his National Action Network to keep him from publicly demonizing them as racist.4

And “Shakedown Al” is far from the only profiteer of racial conflict. Starkes does not detail BLM’s funding, but given recent developments, many of the numbers are easily accessible. DoorDash has pledged $500,000 to the Black Lives Matter Global Network Foundation, as has DropBox founder Drew Houston. Microsoft has pledged $250,000. Amazon, Gatorade, AirBnB, and Nabisco have each pledged hundreds of thousands to the group, which Starkes characterizes as the RGI’s “militant wing and general purpose mob” (29).5

He holds that BLM was created to instigate “racial agitation . . . while pushing a Marxist, anti-police agenda under the guise of ‘black issues’” (29). Starkes is accurate in noting BLM’s Marxist philosophy. Two of its three founders have admitted to being “trained Marxists.” They overtly reference Karl Marx, Chairman Mao, and Venezuelan communist dictator Nicholas Maduro.6 They explicitly state that they seek to abolish all remnants of capitalism. And one of the group’s fund-raisers is Susan Rosenberg, a convicted terrorist and a member of the “Weather Underground,” a Communist terrorist organization.7

Unfortunately, Starkes does not examine BLM’s commitment to Marxism in much depth. Granted, Marxism is a philosophy, and Starkes is a writer, not a philosopher, but it’s not difficult to explain—at least on a basic level—BLM’s attraction to Marxism. Marx construed human society in terms of warring groups locked in a struggle to the death: the oppressor versus the oppressed. It is true that Marx conceived the warring groups as economic classes, not races, but contemporary American Marxists have embellished this theme. It is no longer just the oppressive rich versus the oppressed poor; now it is the oppressive white rich versus the oppressed nonwhite poor. Contemporary Marxists have added a race-war element to their class-war ideology, and nobody has done this more vocally or violently than Black Lives Matter. This, in part, is what makes it such a viciously dangerous organization.

Although Starkes doesn’t explain BLM’s attraction to Marxism, Black Lies Matter nonetheless is a courageous, honest, and accurate exposé of this fraudulent, criminal organization—and of the RGI more broadly—and it deserves the attention of anyone who genuinely cares about black lives and civil society.

Black Lies Matter by @TaleebStarkes is a courageous exposé of @Blklivesmatter—and of the Race Grievance Industry more broadly—and it deserves the attention of anyone who genuinely cares about black lives and civil society.
Click To Tweet

3. Sharpton first rose to national prominence in 1987 when he supported Tawana Brawley in her infamous hoax about race-based abduction and rape. He falsely accused district attorney Steven Pagones of assaulting Brawley. Pagones lost his job, and it took him ten years of litigation to win a defamation lawsuit against Sharpton, who never apologized. Further, Sharpton routinely has demonized Jews and inflamed racial tensions against them. See Kyle Smith, “Al Sharpton Is Not a Civil Rights Hero,” National Review, July 31, 2019, https://www.nationalreview.com/2019/07/al-sharpton-is-not-a-civil-rights-hero/.

4. Isabel Vincent and Melissa Klein, “How Sharpton Gets Paid to Not Cry ‘Racism’ at Corporations,” New York Post, January 4, 2015, https://nypost.com/2015/01/04/how-sharpton-gets-paid-to-not-cry-racism-at-corporations/.